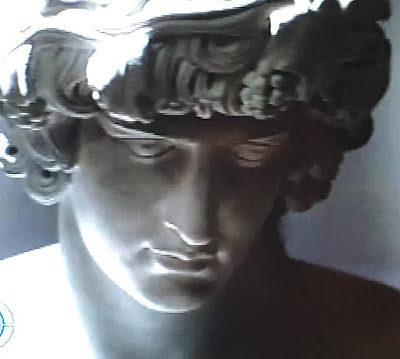 SOMETIMES ... when you least expect it ... Antinous can appear right there in your own living room ... on the TV screen!

Antinomaniacs in Britain could hardly believe their eyes this week when Antinous made a fleeting cameo appearance in a new television commercial for a leading European/Australian opticians firm.

The 30-second advertisement shows a night watchman drowsily making his rounds in the Classical sculpture gallery of a museum which looks a lot like the British Museum ... which is home to the Townley Antinous bust.

The guard ... who is not wearing eyeglasses ... trudges through the gallery, turning off light switches for the night, in this commercial for SPECSAVERS  opticians and eyeglasses which debuted on British television July 11th.

Without seeing clearly what he is doing, the guard accidentally breaks off the penis of a statue ... mistaking it for a light switch ... as the commercial ends with a sly suggestion that he should have gone to the opticians.

Here's the commercial ... watch for Antinous to make his commercial television close-up cameo appearance at 0:11 seconds into the video:

Posted by Hernestus at 9:37 AM