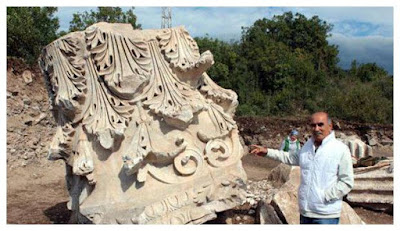 ARCHAEOLOGISTS have begun a new round of excavations in Western Turkey to unearth the legendary Kyzikos Hadrian Temple ... a colossal temple which the Ancient Romans considered "The Eighth Wonder of the World."

"Our goals are to be able to establish the true measure of the temple and the remains of the superstructure, and to reveal the origin of the temple without excavating its higher parts. So far, we have partly learned this,"  Nurettin Kochan, head of Ataturk University’s archeology team, told Turkey's Andalou news agency.
The longest side of the temple, measuring some 161 meters, was unearthed in 2010, recalled Kochan. 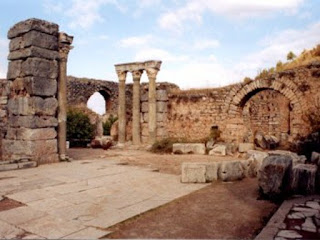 The enormous temple was subject to major destruction over time, as the marble works of the temple were burned up in lime wells and cube-shaped dry cereal stores were placed around the temple. The area was used as a cemetery during the Middle Ages.

During the previous 10 excavation campaigns at the site, teams have unearthed lion-headed marble gutters, 105x85-cm full-size marble roof tiles, 2.25-meter columns, cube-shaped food stores known as Pithos, Kyzikos coins, a king's head, and a tomb in which 10 people were buried with gifts, inscriptive stones providing information about the tomb.

Most spectacularly, the archaeologists unearthed the largest Roman era capital measuring some 1.9 meters in diameter, 2.5 meters in height and 20 tons in weight. 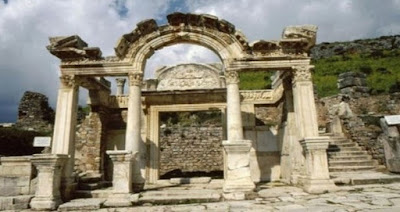 "This is the largest and most exquisite Corinthian capital built within the territory of the Roman Empire," Kochan said.

In architectural terminology, the term "capital" derived from Latin caput, or "head," which forms the topmost member of a column. It also mediates between the column and the load thrusting down upon it.

Calling the Temple of Hadrian the eighth wonder of the world, Kochan said "There’s no other capital of this size in the Corinthian order."

He added: "Kyzikos Hadrian Temple outshines even the Baalbek Temple of Jupiter in Lebanon, considered the largest and most spectacular Corinthian temple in the world."

The Hadrian temple is one of the largest temples in Anatolia, according to Kochan's assistant, Korkmaz Meral, who added that frequent large earthquakes had caused great damage in the area around the temple.
Posted by Hernestus at 9:00 AM