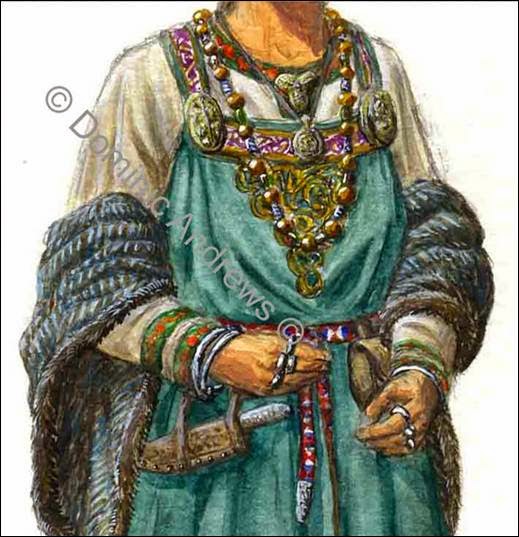 A thousand years before the siege of Troy, a woman in what is now Denmark was buried wearing a necklace whith "magical" cobalt blue glass beads which had been made in Egypt.

The discovery was made by experts from Moesgaard Museum in Aarhus, the National Museum of Denmark in Copenhagen, and Institut de Recherche sur les Archéomatériaux (IRAMAT) at Orléans, France.

It proves that there was a lively trade route between northern Europe and Ancient Egypt in the era of King Tutankhamun … 3,400 years ago.

Experts have long known that Baltic Sea amber was sought after by the Greeks and Romans.

But until now, it was not known that the Ancient Egyptians, who were well known for their glass technology, operated trade routes that supplied Northern Europe with Egyptian-made glass.

The discovery suggests trade routes between Denmark and the ancient civilizations in Egypt and Mesopotamia in the Bronze Age 3,400 years ago. The discovery also gives us new knowledge about the sun cult in the Nordic Bronze Age.

Archeologists Jeanette Varberg from Moesgaard Museum and Flemming Kaul from the National Museum, and Bernard Gratuze, director of IRAMAT, analysed the composition of some blue glass beads found on a buried Bronze Age women in Denmark.

Without destroying the fragile beads, this technique makes it possible to compare the chemical composition of trace elements in the beads with reference material from Amarna in Egypt and Nippur in Mesopotamia, about 50 km south east of Baghdad in Iraq. The comparison showed that the chemical composition of the two sets of trace elements match.

The researchers' first object for comparison was a bead from a wealthy woman's grave at Ølby, 40 km south of Copenhagen.

The woman had been buried in a more extravagant fashion, lying in a hollowed-out oak trunk and wearing a beautiful belt disc, a smart string skirt with tinkling, shining small bronzes tubes, and an overarm bracelet made of amber beads, and a single blue glass bead.

The glass bead turned out to be Egyptian. This is the first time that typical Egyptian cobalt glass has been discovered outside the Mediterranean area.

Now the researchers are linking amber and glass together in an unexpected way. One property that both glass and amber have is that sunlight penetrates their surface. The archaeologists believe this could be proof of a link between the Egyptian sun cult and the Nordic sun cult.

When a Danish woman in the Bronze Age took a piece of jewellery made of amber and blue glass with her to the grave, it constituted a prayer to the sun to ensure that she would be re-united with it and share her fate with the sun's on its eternal journey.