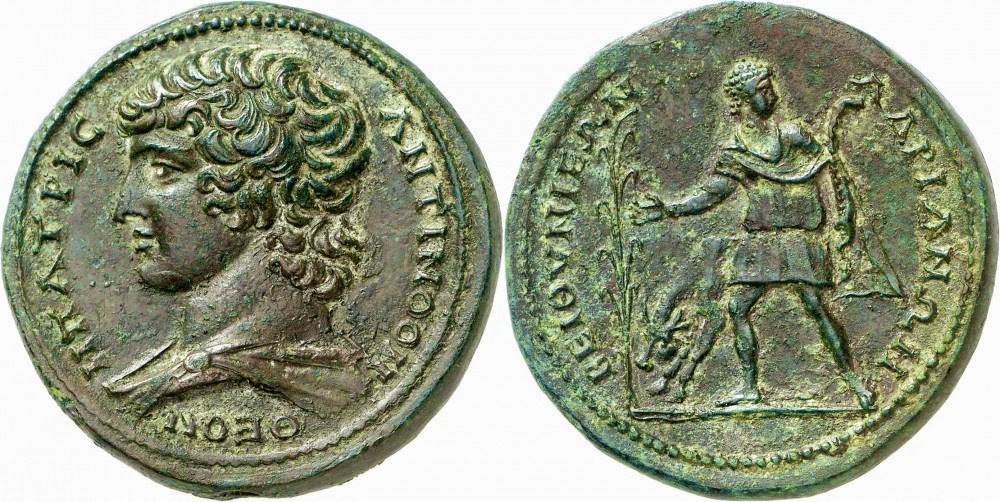 THIS stunning ancient bronze commemorative Antinous medallion is up for auction in Geneva ... at a starting bid of 300,000 Swiss francs ($310,000) ... proving once again that "Antinomania" is very much alive amongst collectors.

It is literally in "mint condition" ... as pristine as the day it was minted more than 1,800 years ago in Bithynia, birthplace of Antinous in what is now Turkey.

In ancient times, Antinous coins and medallions were carried as amulets and talismans by his worshipers. Most people could not read, but they could understand the symbolism on his coins.

This is a bronze medallion showing Antinous on both sides. CLICK HERE for details on the auction.

On one side Antinous is seen in profile. On the other side, Antinous as Hermes/Mercury Nomios is clad in short chiton and chlamys cloak, holding a hunter's pedum or lagobolon stick in his left hand and advancing left, head turned right. With his right hand he reaches for a reed. Beside him, left, a bull grazes at his feet.

This large and impressive object, appropriately called a 'provincial medallion', was struck at Antinous' birthplace, Bithynium-Claudiopolis, in Bithynia.

On this medallion the reverse is particularly clear, showing him looking back over his shoulder as he advances left, toward a tall, reed-like plant. Beside him is a grazing bull, and above is a star ... only faintly visible on this coin but known from other coins identical to this one.

Although Antinous is usually described on identical coins as here being in the guise of Hermes/Mercury, some experts believe it is a representation of Antinous as the divinized herdsman of Bithynium – a place famous for its orchards, fields and pastures.

We should also note that the pedum (lagabolon) Antinous holds, though principally meant to be thrown at hares to kill them, often is described in a more general fashion as a shepherd's staff.

We must remember that the Religion of Antinous was vying for worshipers along with Christianity, and the symbolism of the good shepherd was clearly understandable to anyone who saw this coin ... even the most illiterate peasants.

The active and elaborate composition of the scene suggests it was copied from a prototype – perhaps a statuary group, but more likely a mosaic or painting, the latter of which are attested to in Bithynium-Claudiopolis.

On one side the splendidly preserved inscription says: BEIQUNIEWN ADRIANWN and on the other it identifies him as H PATPIC ANTINOON QEON.

In his authoritative book about Antinous, BELOVED AND GOD, Royston Lambert points out that in ancient times many followers of the Blessed Youth felt it was necessary to have a tangible representation of Antinous with them at all times for protection and for blessings.

Some of the devotees evidently could not bear to be parted from the beneficial and reassuring presence of their Antinous.
People of modest means who were lucky enough to get their hands on one of his commemorative coins would carry it with them for protection, often even wearing them.
Many were pierced by holes and hung from the neck as talismans: Antinous' image offering protection against evil, sickness and death.
Other such medallions were mounted in frames to adorn household altars, and others were buried with the dead to invoke the god's aid on the perilous journey into the unknown.