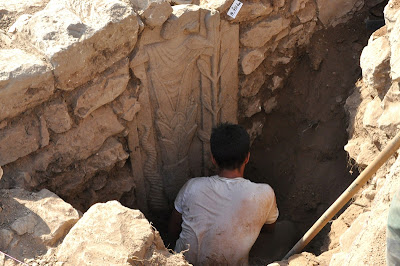 A dig carried out by German archaeologists at the sacred site of Jupiter Dolichenus in modern-day Turkey, the homeland of Antinous, has revealed a unique Roman relief depicting an unknown god.

The 1.5 meter (five feet) high basalt stele dates to the time when Antinous lived and it was preserved only because it was re-used as a buttress in the wall of a Christian monastery built over the Roman temple close to the ancient city of Doliche in Southeast Turkey.

Jupiter Dolichenus is a Roman deity created from the syncretization of Jupiter/Zeus and a form of Baal worshipped in the city of Doliche near modern-day Gaziantep on the border between Turkey and Syria.

The "mystery god" depicted on the stele appears to be far older than Jupiter Dolicenus. Apparently, this was the mystery deity's temple before he was Jupiter's ... and long before it became a Christian monastery.

The worship of Jupiter Dolicenus flourished during the reign of Hadrian and his successors, particularly in the Roman Army, where he was regarded as all powerful and strongly associated with victory in war. 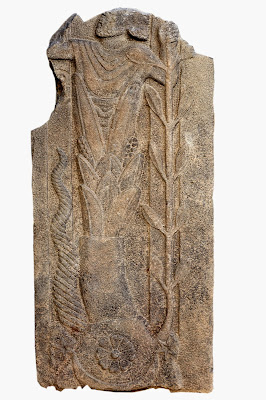 The experts found images of Jupiter Dolicenus, as expected.

But the experts from the University of Münster in Germany are totally baffled by the mystery god whose image was found deep inside the temple.

"The image is remarkably well preserved. It provides valuable insights into the beliefs of the Romans and into the continued existence of ancient Near Eastern traditions." says archaeologist Michael Blömer.

"However, extensive research is necessary before we will be able to accurately identify the deity," he adds.

During the 2014 field season, the 60-strong excavation team uncovered finds from all periods of the 2,000-year history of the cult site.

They uncovered the thick enclosing wall of the first Iron Age sanctuary and the foundations of the main Roman temple of the god Jupiter Dolichenus, who became one of the most important deities of the Roman Empire in the 2nd Century AD … when Antinous lived.

Blömer describes the depiction: "The basalt stele shows a deity growing from a chalice of leaves. Its long stem rises from a cone that is ornamented with astral symbols. From the sides of the cone grow a long horn and a tree, which the deity clasps with his right hand. The pictorial elements suggest that a fertility god is depicted."

There are striking iconographic details such as the composition of the beard or the posture of the arms, which point to Iron Age depictions from the early 1st millennium B.C.

The mystery god proves that pre-Roman beliefs continued into the imperial age. Experts hope to find an inscription identifying this deity.