THE BIRTH OF LUCIUS AELIUS CAESAR 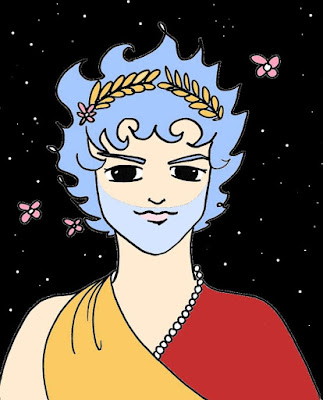 ON January 13th the Religion of Antinous celebrates the birthday of Aelius Caesar.

Lucius Ceionius Commodus Verus was born on January 13th, 101, most likely in Rome. He was from an old wealthy Etruscan family.

His grandfather, after whom he had been named, had been a Consul and his father a Senator.

Lucius Ceionius was beautiful and elegant, well educated, and was given over to a life of pleasure and voluptuousness.

He was a teenager when Hadrian came to power in 117, and his flamboyant and attractive character was a compliment to his physical beauty that soon gained the attention of the new Emperor.

It is believed that Hadrian and Lucius were lovers during the early years of Hadrian's reign, perhaps for the period of six years prior to Antinous.

When Hadrian met Antinous in the year 123, Lucius was 22 years old, and in keeping with the Greek philosophy of pederastic love, it is very likely that their love affair had transformed into what would become a life-long friendship between the Emperor and his now matured Lucius.

Antinous entered Hadrian's heart just as Lucius was moving on to his responsibilities as a patrician citizen of Rome. There were rumors of rivalry, as spoofed in this cartoon by Priest Uendi showing Lucius left, Hadrian at right and Antinous between them.

While Hadrian was courting the young Antinous, Lucius married Domitia Lucilla and had three children by her, one of which was the later Emperor known as Lucius Verus, who is often confused with his father. 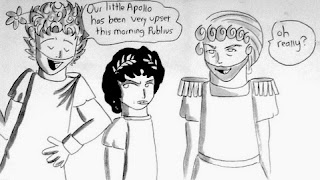 After the Death of Antinous, as Hadrian began to grow ill, his attention turned again to his still beloved Lucius, and on August 10, 136, Hadrian surprised the world by adopting Lucius and declaring him to be his successor.

Suspicions abounded, as the eccentric and delicate character of Lucius hardly seemed appropriate to rule the Empire after such a man as Hadrian.

But there must have been more to Lucius than history has preserved. He assumed the name Aelius Caesar, and was sent to govern Pannonia along the Danube, but became ill and returned to Rome in the winter of 137, where he died on January 1st.

He is remembered and adored as a god, as the brother of Antinous, the twin and second love of Hadrian. We call him the Prince of Flowers.