THE MARTYRS OF ANTINOOPOLIS 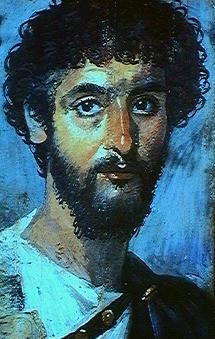 This part of Egypt, near the nome sacred to Anubis, has always been a hotbed of religious fervor ever since the days when the "heretic pharaoh" Akhenaten built his capital city here, a scant 20 kms from our Sacred City of Antinoopolis. Christians and Jews constituted a major portion of the population of Antinopoolis.

After all, the city was the flower of Greek civilization deep in the desert of the Thebaid, and it was a haven for dispossessed and exiled thinkers and theological revolutionaries.

There was a period of time in which Antinoopolis fell under the sway of the fear and violence that had swept across the world. The Christian faith was suffering one of the bloodiest persecutions in its history. Diocletian had sought to curb the rising tide of Christianity with brutal violence. He issued decrees that all citizens should be compelled to demonstrate their piety to the Roman Gods by offering sacrifice. It was a direct challenge. Any person who refused was not only insulting the Gods of Rome, but showing disloyalty to the Emperor and to Rome herself.

The image above left is not Asclas, but is a burial painting of a person whose mummy was buried in the desert of the Fayoum in Egypt, which is the region of Antinoopolis. It is presented here as a contemporary image of what St. Asclas may have looked like.