WE CELEBRATE THE NEPTUNALIA
AND HONOR ANTINOUS LINKS TO NEPTUNE 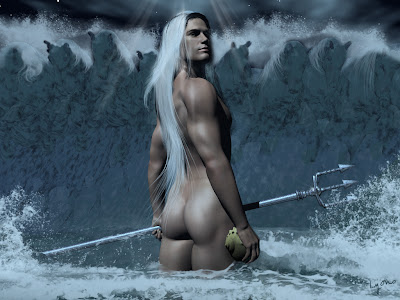 THE 23rd of July is the ancient Roman Neptunalia festival, when Romans honored Neptune with feasting and frivolity.

Although identified with the Greek Poseidon, god of the sea, the Roman Neptune was originally god of fresh water and prayed to at this time of year to prevent drought.

Coins minted by a priest of Antinous in Corinth show Antinous with Neptune/Poseidon.

More clues to the link between Antinous and Neptune come from the Black Sea coast.

Experts working at a dig on the Black Sea coast in Bulgaria say they have found a well-preserved altar to Poseidon/Neptune which suggests the surrounding ruins were once a major temple to the god of the seas.

Archaeologists found the building in front of the medieval fortified wall of the seaside town of Sozopol, according to Bozhidar Dimitrov, director of Bulgaria’s National History Museum.

It is a little-known fact that Antinous was associated in a gay context with the classical god of the seas, called Poseidon by the Greeks and Neptune by the Romans.

Coins minted by a priest of Antinous at Corinth named HOSTILIUS MARCELLUS (from whom our own Julien Hostilius Marcellus takes his priestly name) show Antinous as Neptune/Poseidon.

It is a reference to the myth that Poseidon became enthralled with another marine male deity, Nerites, who was said to be the handsomest of all males on Earth, in the Heavens or in the Seas.

The sexual union of Poseidon and Nerites produced Anteros, god of requited love.

In those days, few people could read or write, but everyone knew these myths. So anyone who held one of these Antinous/Poseidon coins could "read" the gay symbolism.

So any discovery concerning Neptune/Poseidon is of great interest to us, since the dig could ultimately reveal Antinous-related artefacts.

At the Sozopol site, Dimitrov said that the numerous pieces of marble found during excavations indicate that the temple was destroyed after the declaration of Christianity as the official religion of the Roman empire in 330 AD.

The structure was partially pulled down and partially reconfigured as a Christian house of worship dedicated to a Christian saint, whose iconography was similar to that of the ancient god Neptune.

Dimitrov said that in Sozopol, there was a simiar example of how a temple to the Thracian horseman in the centre of the old town was converted into a church dedicated to Saint George, riding a horse to slay a demon dragon.

He said, according to a report by local news agency Focus, that in the case of the temple to Neptune – the god of the sea – the time of its destruction saw the building of a Christian church a very short distance away, dedicated to Saint Nicholas, the patron saint of fishermen and sailors.