THE SACRED GAY MARTYRS OF IRAN 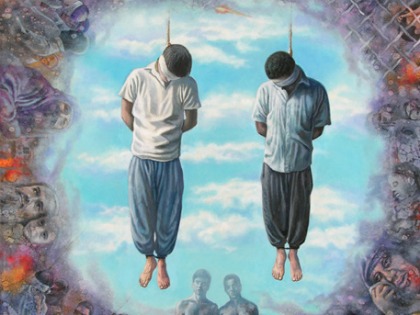 Their names were Mahmoud Asgari and Ayaz Marhoni, one 18 and the other 17 or 16 years old.

They were accused of raping a 13-year-old boy, but it has been established that the authorities invented the charge of rape in order to prevent public sympathy for the true reason for their execution, that they were Homosexuals.

After their arrest the two boys endured a year of imprisonment and  torture before the high court of Iran upheld their sentence and their  execution by hanging was carried out in a public square in the city of Mashad. 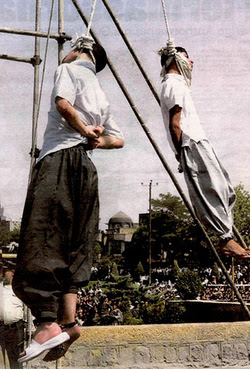 International outrage was met with arrogance and impunity by the religious and conservative Iranian government, and a systematic persecution soon began against homosexuals, which has led to an unabated spate of sporadic executions over the years, and untold numbers of arrests and torture.

These events indicate that the worldwide struggle for Gay Freedom has not decreased but has become more violent and inhumane.

The photo at left is a shocking depiction of anti-homosexual violence.

For their suffering, we proclaim Mahmoud Asgari and Ayaz Marhoni and all of the unnamed gay victims of Iranian persecution, Saints and Innocent Martyrs of the Religion of Antinous.

May all those who see this image of violence rise up for the cause of Gay Freedom, and remember those who suffer in Iran.