RUFUS WAINWRIGHT'S OPERA 'HADRIAN'
HAS ITS EUROPEAN PREMIERE IN MADRID 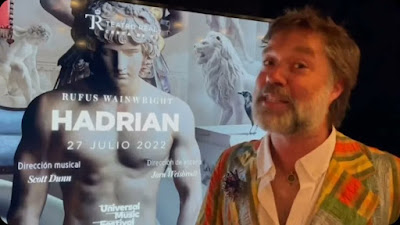 IN it's European premiere, a concert production of Rufus Wainwright's award-winning opera HADRIAN is being staged tonight at the Teatro Real in Madrid.

The production will feature illustrations by Robert Mapplethorpe.

Thomas Hampson will sing the title role as he did at the world premiere of the opera in Toronto in 2018. Antinous will be sung by tenor Santiago Ballerini.

The opera's world premiere on 13 October 2018 at the Canadian Opera Company got a standing ovation during repeated curtain calls from a sold-out capacity audience at the Toronto opera house.

In the audience were a number of followers of Antinous and one of them posted this notice to us:
"Sold out house. Audience rapt for the entire performance, barely moved. The libretto is such a fascinating story. I was moved several times. Sets and costumes are effective. Performances outstanding. There's a curious feeling in this production as if you're looking at the ancient world from their standpoint, not ours looking back. It really grew on me. Some of it is so sublime. The past really is a foreign country."
Peter Hinton directed a cast that included baritone Thomas Hampson as Hadrian and renowned tenor Isaiah Bell as Antinous, with Karita Mattila as Plotina.
Over four acts and three locations ... Hadrian’s villa, Greece, and Egypt ... the opera "is a surreal romp through time and space, mixing true occurrences with complete fabrication in order to illustrate a vivid 'creative snapshot' of what the end of the Classical era may have felt like," Wainwright says. 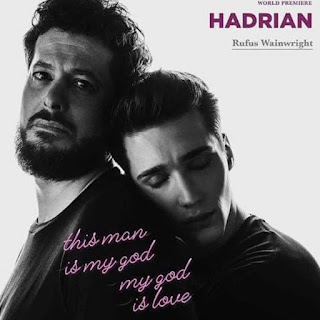 It opens on the last night of Hadrian's life in 138 AD. He wants to know the truth about Antinous' mysterious death eight years earlier in October of the year 130 AD.
Was it an accident? Or murder? The plot twists, political deals are struck amidst power struggles, deceptions, and visiting ghosts. And then it ends where it started.
But not before a love scene: "I realized that there are no sex scenes written into opera," Wainwright tells The New York Times, "let alone anal sex scenes. I think for some people it will be powerful to see gay love represented in the larger-than-life fashion that only opera can provide," he adds.
"When I first read the fabulous "Memoirs of Hadrian" by Marguerite Yourcenar, a novel which inspired at least three generations of gay men, I was instantly struck with the idea of transforming this historical subject into operatic form," Wainwright says.
Posted by Hernestus at 12:00 AM