THE BIRTH OF HADRIAN 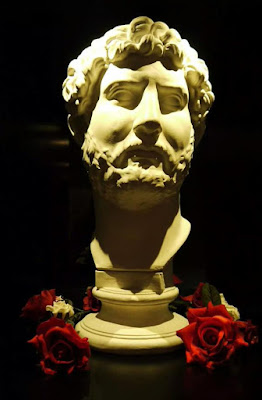 ON January 24th the Religion of Antinous celebrates the Birth of the Divine Hadrian.
Publius Aelius Hadrianus was born on this day either in Italica, Spain, or else in Rome, in the year 76.

His father was Publius Aelius Afer, his mother was Domitia Paulina. His uncle was the Emperor Trajan who had been adopted by Nerva.

Trajan employed Hadrian as a general in his conquests across the Danube, where Hadrian proved his military prowess, and gained the love and devotion of the Legions.

It is said that the relationship between Hadrian and his uncle was strained, and they are even known to have quarreled over beautiful boys. But Hadrian was very close to the Emperess Plotina, whose intellectual depth he preferred to the military harshness of Trajan.

During the unsuccessful campaign against the Parthians, in modern day Iraq, Trajan suddenly fell ill and died. Plotina is said to have insured that Hadrian be his successor, allegedly even forging the documents of adoption.

The New Emperor Hadrian inherited the largest Empire that the world had ever known, the borders of Rome had reached their greatest extent.

Hadrian is the Father of the Antonines, the bringer of the Golden age of Rome. He put an end military expansion of the Empire and turned instead to improving the interior.

He is the prime deity of the imperial cult as recognized by the Religion of Antinous. He is the representative of Zeus on Earth, emblem of the ruler of the cosmos, the great eagle. Hadrian is the leader of the Archons, the bringer of order out of chaos, founder of our religion.

He is the divine lover of Antinous, our model and God.