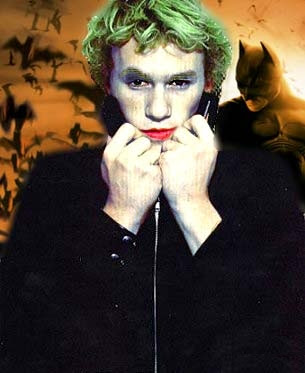 ON January 22nd the religion of Antinous commemorates the brief, shining life of Saint Heath Ledger, the gifted actor whose on-screen portrayals inspired millions of gay people and whose off-screen life paralleled so many more. Not gay himself, Saint Heath nonetheless is a gay icon, like Saint Judy Garland and others.

Saint Heath died on this day in 2008 under mysterious circumstances after taking anti-depressants and sleeping pills at the age of 28.

His body was found lying across the bed of his Manhattan apartment. The manner of his death bore eery parallels to the death of English  singer/songwriter Nick Drake, who is also a Saint of Antinous.

Best known for his Oscar-nominated role as a gay cowpoke in "Brokeback Mountain", the acclaimed Australian-born actor also played The Joker in the blockbuster "The Dark Knight", for which role he posthumously was awarded a Golden Globe Award for best supporting actor. On the first anniversary of his death, he posthumously won an Academy Award as best supporting actor for his role as the psychopathic criminal mastermind The Joker.

Just as no one knows for sure what happened to Antinous. Thus they are all Saints of Antinous. 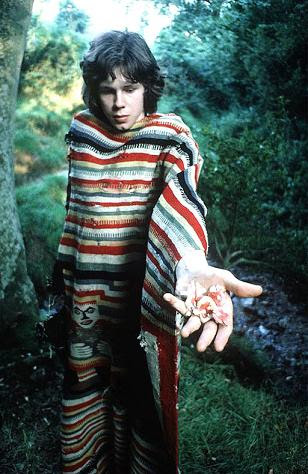 Shortly before his death, Heath Ledger made a video tribute to Nick Drake (photo right), the ambisexual English singer/songwriter who died in 1974 under almost identical circumstances to Saint Heath.

Saying he planned to make a movie about Saint Nick, Heath appeared in a self-made video (about drowning) to the tune of Nick Drake's song Black-Eyed Dog. It was the last song that Nick is believed to have recorded before he died under mysterious circumstances after taking anti-depressants and sleeping pills at the age of 26. His body was found lying across his bed.

The black-eyed dog is thought to be a reference to Winston Churchill's famous "little black dog." Throughout his life Churchill was shadowed by violent mood swings, fits of depression and periods of emotional doubt. He felt that he was followed by this unpredictable darkness and uncertainty. He called it his "little black dog."

Heath seems to have been very well acquainted with the "little black dog" of depression, the black demon which nips at the heels of so many sensitive young souls who cannot find their way in this harsh world.

And thus Antinous is the God of Lost Boys. He knows their suffering. He knows how it is to stand on the shore at the twilight of the world, with one foot on dry land and the other foot in the murky depths of oblivion — and he understands how a beautiful soul can slip off into that oblivion.

Antinous is the God of these very sweet, shy, sensitive and talented artists, young men who agonize over their shortcomings and who can only cope with the harsh realities of showbiz by taking tablets with unpronounceable names in private.

Saint Heath represents so many young men who seek what Nick Drake called the fruit of the tree of fame. "Fame is but a fruit tree, so very unsound", Nick sings in a song which Heath loved. It is a song about sensitive souls who reach for the fruit of fame and then, when it is within their grasp, they discover that its taste is very bitter.