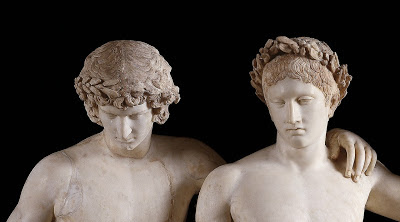 WE believe Hadrian may have celebrated his birthday on November 24th, 129 AD, in the city of Tripolis in what is now Lebanon during his tour of the Eastern Provinces with Antinous at his side.

Tripolis was an important Phoenician trading city founded in the 8th Century BC. it was where the three major Phoenician city-states of Aradus, Tyre and Sidon came together to form a trading alliance.

The Greeks called it Tripolis, or "Three-Cities" because it was composed of three separate, walled communities for each of the three city-states.

The patron gods of the city were probably the three Baals of the separate quarters, but during the Hellenistic and Roman eras, the Dioscuri twin gods became prominent and appear on the coins of Tripolis.

It should be noted that the Dioscuri were actually Triplets according to some traditions.  The twin brother gods Castor and Pollux had a twin sister, Hellen of Troy. The two brother gods, together with their mysterious sister were therefore a symbol of city-states coming together.

Hadrian may have celebrated his birthday there as he inspected the many building projects that he had initiated, as Tripolis was one of the most Hellenized cities of Syria, being connected with the Greeks from an early age and not being under the full control of any one Phoenician state. It was therefore an open port that embraced modernization and would have welcomed the Greek-loving Emperor Hadrian.

The city was a Byzantine stronghold until it fell to the Muslims, only to be conquered by the Crusaders and then later by the Ottoman Turks.

Tripolis was famous for its luxurious bathhouses, which the Ottomans called Hammams.

Some of these bathhouses date to the Roman era and may have been visited by Antinous, for whom bathing was a sacred ritual and which later became part of his religion.

We celebrate the bathing ritual of Antinous and the spirit of cooperation between different people and cultures which made Tripolis so strong and prosperous.  The Twin Gods are equated to Gemini and are also said to represent lovers, such as Hadrian and Antinous, who share a close spiritual bond known as twin flames.

We pray to the Twin gods to watch over us as we unite with Antinous and Hadrian in our hearts.