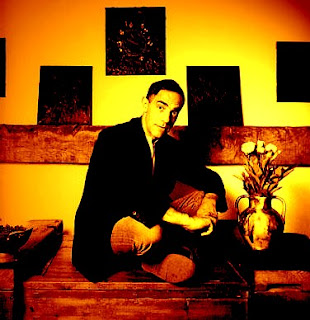 ON January 31st the Religion of Antinous celebrates the life of Saint Derek Jarman.

St. Derek, born on this day in 1942, created eleven extraordinary feature films ... including "Sebastiane," "Jubilee," "The Tempest," "Caravaggio," "The Last Of England," and "Edward II" ... and over three dozen shorts.

Most gay men have seen Sebastiane which, when it came out more than 30 years ago, was the first British film to feature positive images of gay sexuality, not to mention the first film entirely in Latin.

Edward II raised eyebrows among critics for its upfront depiction of the brutal assassination of England's openly gay monarch by means of rectal assault.

We Antinoians remember Saint Derek for his art and we honor him as well for his boundless courage. His death from AIDS was cruelly slow and agonizing. And yet, as AIDS robbed him of his mobility and even of his eyesight, he turned the tables on Death and Dying by turning Death and Dying into an art form.

His last feature-length film, Blue, consists of a single shot of saturated blue color filling the screen as Derek talks about his "vision" of life and art. How very typical of Derek Jarman.

Thumbing his nose at fate right up to the end. A dying man who is blind and yet who talks about his vision.

The light of his eyes faded until all he saw was the darkness where the Night Terrors feed on fear and doubt. And what did Derek do? He turned the darkness into vibrant color. He turned his fear and his worries into artistic energy. The dramatic lighting and brilliant colors of his films were so very dramatic and brilliant because they were always, always set against the inky darkness.

That is why we consecrate Derek Jarman a Saint of Antinous. Just like Saint Caravaggio, also one of our Blessed Saints, Martyrs and Exemplars, his "vision" lay in turning the Darkness into Light and Color. He died February 19, 1994.