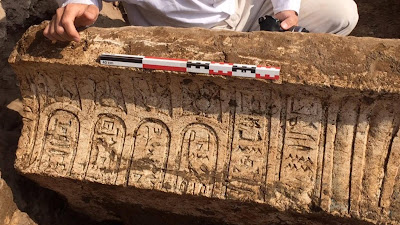 It is the first inscription ever found at Antinoopolis which shows the name ANTINOUS IN EGYPTIAN HIEROGLYPHS ... I-N-D-I-I-NU-S.

"The inscription on the long side of the cornice block is a very special find" said James B. Heidel, president of the Antinoupolis Foundation.  (See photo at top or the ones below for inscription detail.) 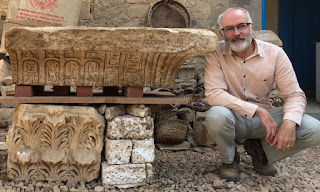 The two left cartouches are those of Hadrian, and the two on the right are those of Sabina, his wife. Sabina's right-hand cartouche spells "Sabina" and below that is the beginning of "Sebaste" which is Greek for "Augusta."

Heidel said the presence of Sabina's name is remarkable; this makes only the third instance of a Roman emperor's wife being named in a cartouche in a hieroglyphic inscription.

"In addition," he added, "due to the presence of Sabina's name we can know that this inscription was carved (and likely that the temple was constructed) between October 30, 130 AD (the city's founding date) and late 136 or early 137, the date of Sabina's death."

The other cartouche on that side refers to the Emperor as "Hadrian beloved of HAPI" the Nile inundation deity responsible for the first miracle of Antinous as a god ... the bountiful flood of the year 131 AD which ended a long drought.

The two columns of inscription are also important. The one on the right concerns the goddess Hathor, and the one on the left names the god "Osiris-Antinous".

"This is to my knowledge the only inscription so far recording the name of Osiris-Antinous to be found at Antinoupolis itself," said Heidel.

ANTONIUS SUBIA, founder of the modern religion of Antinous, calls this discovery wonderful and notes the symbolism of the names inscribed on the cornice stone. 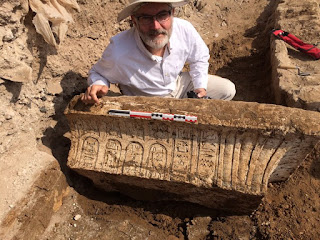 "Hathor is Our Lady Venus," Antonius said in an initial reaction. "Hadrian and Sabina are in the cartouches. Hathor is the first column to the right, Antinous is the furthest right. So, yes, it makes perfect sense for Hathor to stand between Hadrian-Sabina and Antinous. It's wonderful!"

Archaeologist Heidel also said this is a spectacular discovery ... he called it a "BLOCKbuster discovery" ... which specifically identifies what could possibly be the Great Temple of Antinous at the city founded by Hadrian at the spot on the Nile where Antinous died in October 130 AD.

"This cornice block proves that the structure we are excavating is one of the temples that Hadrian built at Antinoopolis, and the analysis will likely show to whom the temple was dedicated:  Osiris-Antinous, Hathor, or a combined dedication of the two."

Earlier this week Heidel confirmed that the dig site was, in fact, a temple. His announcement is based on the discovery of the inscribed cornice stone which could only come from a large temple.

"We have suspected and proposed for some time that our structure was built during the reign of Hadrian and is a temple of Osiris, perhaps even Osir-Antinous, but until now this suspicion has been a hypothesis only," he says in a newsletter Tuesday. 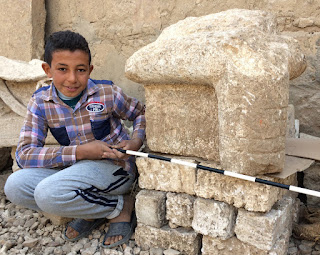 "One part of that hypothesis is answered:  the structure is a temple.

"The reason this is so exciting is that 'New' temples are rarely discovered in Egypt and also because the rest of the hypothesis stands ... we may have a Hadrianic-period temple of Osir-Antinous."

The cornice stone ... which has lain undisturbed for centuries ... may hold vital clues to the location of the Great Temple of Antinoopolis in the center of the city founded by Hadrian on the spot where Antinous died in the Nile.

It crowned the top of a large temple which had a grand staircase. Archaeologists say it was one of the first stones to be pried off the facade when barbarians destroyed the edifice ... in order to build churches ... or to burn the marble to extract lime.

Meanwhile, the archaeologists also found a curious sloping passageway that leads underground ... and they also have found a mysterious circular well which may have been a Nilometer for measuring the floodwaters of the Nile.

But the cornice stone is the vital clue to the existence of a large temple.

He adds: "The block in the photo was tipped off the very top of the building at the beginning of the dismantling and lay forgotten in the rubble below until now.  And it's inscribed!" 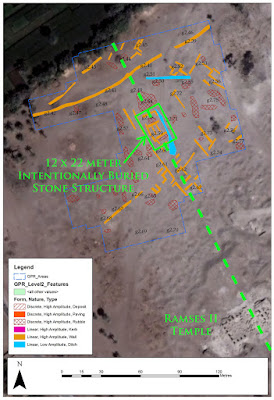 Countless thousands of ancient temples and palaces were used as "stone quarries" to construct churches, mosques and other structures over the centuries.

Many marble edifices and statues were burned in kilns to extract lime.

So it is a miracle that this inscribed cornice stone has survived. The incription may suggest the purpose of the building.

"This block's form also solves many questions regarding the facade of our building, and (together with several other fragments from the excavation) forms a group of diagnostic blocks just large enough to propose a likely reconstruction for our building's facade," Heidel writes in his latest newsletter.

"Reconstruction drawings for the rest of it will have to wait until the rest of it is excavated.  And the excavation will definitely continue next season if we are allowed permission to work," he adds.

"Looking at the photo, can you tell what part of the building it comes from?" he asks.

This is only the latest discovery in recent weeks ... including
an INTENTIONALLY BURIED STONE STRUCTURE in the heart of the city founded by Hadrian at the spot where Antinous died in the Nile.

While the archaeologists suggest it could be an OSIREION ... symbolic Tomb of Osiris ... raising hopes that this could be the Lost Tomb of Antinous.

The structure was detected with ground-penetrating radar.

It is located near the waterfront peristyle discovered last season.

As a final exciting detail, the stone structure and the arrangement of the surrounding walls indicate an axis which would not only correspond to the grid of the Ramses II temple, but an axis which would enter that temple in the middle of the side of the "hypostyle hall," which is the hall of columns between the back shrines of the temple and the court at the temple's entry.

The building with the grand staircase forms the center of this hypostyle hall.

"This axis is a normal place for the main side entrance into an Egyptian temple precinct," the report goes on.

"And it appears that this structure, if built by Hadrian, was intended by his designers to be an extension of the Ramses II temple complex."

We know that Emperor Hadrian commanded that a sacred city be founded at the location where Antinous drowned in the Nile.

We also know from an ancient papyrus that an impressive quayside port facility was constructed at or near that site.

Heidel, president of the Antinoupolis Foundation, says the discoveries in the past two years at the site have exceeded all expectations.

Finds include ornate capitals which once adorned colossal columns.

Heidel also says LOOTING has abated somewhat following a return to a semblance of stability in Egypt.

Since the revolution in Egypt, which resulted in runaway lawlessness, the site has been subject to "SYSTEMATIC LOOTING" for three years. 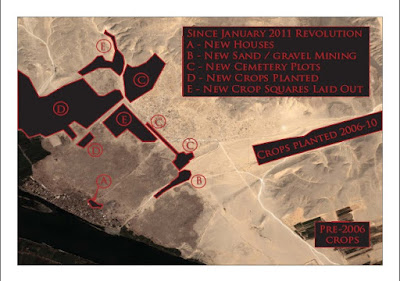 The scope of looting diminished in recent months, although local villagers still search for "trinkets" to sell on the black market, he writes.

Heidel says his archaeologists working at Antinoopolis (also known as Antinoe) say local villagers continue to encroach on the dig site ... ostensibly to create new space for housing and graves.