MYSTERIOUS metal ingots linked to the mythical civilization of Atlantis have been recovered from an ancient shipwreck off the coast of Sicily.

Archaeologists last month recovered a wealth of ingots of an unusual golden alloy from the wreck sitting in about 3m of water, 300 meter off the coast of Gela in southern Sicily.

Also recovered from the wreck, which sank some 2,600 years ago, were two Corinthian war helmets and containers once used to hold precious, scented oils.

But it is the rough lumps of metal still shining with red and gold hues after two millennia on the sea floor that has excited the archaeological world. 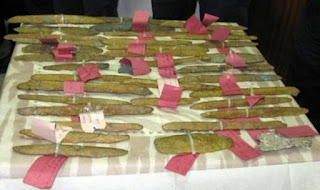 It could be orichalcum, the mythical lost metal of Atlantis.

Orichalcum or aurichalcum is a metal mentioned in several ancient writings, including the story of Atlantis in the Critics of Plato.

Within the dialogue, Critias (460 – 403 BC) claims that orichalcum had been considered second only to gold in value and had been found and mined in many parts of Atlantis in ancient times, but that by Critias' own time orichalcum was known only by name.

Orichalcum may have been a noble metal such as platinum as it was supposed to be mined, or one type of "red gold" (copper/gold) or possibly some other metal alloy.

But, in 2014, the metal returned to reality with discovery of the wreck off Sicily.

In 2015, 39 roughly-cast lumps of an unusual red-gold metal were recovered from the sea floor.

Divers uncovered another 47 ingots from the mud last month.

The archaeologists working on recovering the wreck say it went down within sight of safety.

"The ship dates to the end the sixth century BC," Sicilian archaeologist Sebastiano Tusa told Seeker.

"It was likely caught in a sudden storm and sunk just when it was about to enter the port."

This rules out Atlantis. Plato, writing in the 4th Century BC, implies that legendary city slipped beneath the waves many hundreds ... perhaps thousands .. of years earlier.

Archaeologists believe the ship was exporting the orichalcum from Greece or Asia Minor.