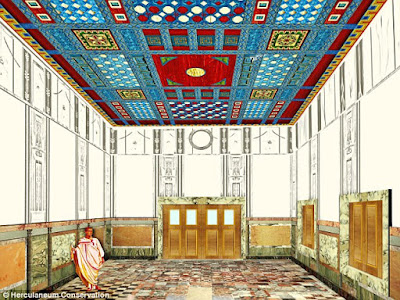 THIS has been a major week for Pompeii and Herculaneum: Two houses in Pompeii were reopened to the public today following extensive renovation work to shore up crumbling walls ... and experts have reconstructed the ceiling of a huge villa in Herculaneum (image above). 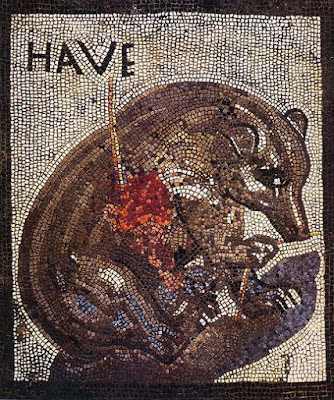 It is now possible to visit the House of the Wounded Bear and the Villa of Siricus ... as well as other sites in Region VII of the ancient city.

The Regio VII of Pompeii is one that includes the Forum and the first stretch of Via Abundance to the baths. And just behind of the baths is the House of Siricus, one of two domus sites that are now open starting immediately.


In ribbon-cutting ceremonies, dignitaries also reopened the main streets of the Regio VII and the House of the Wounded Bear ... with is actually open to the public for the very first time. It is named for the foyer mosaic showing a bear wounded by a lance.

The mosaic has been restored and is now protected by a glass wall that allows you to admire it without compromising the preservation.

It is the same method which was tested with the "Cave Canem" (Beware of the Dog) mosaic at a house on on via Abundance. 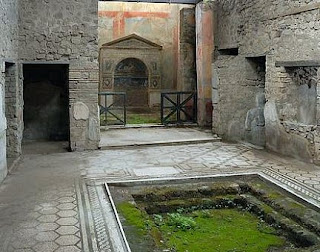 The House of Siricus is located a few steps from a brothel. It has impressive mosaics and frescoes, including several frescoes on the walls inspired by the Trojan War: Hercules at the court of Queen Omphale (north wall), Thetis in Hephaestus (east wall) and construction of the walls of Troy (west wall).

In Herculaneum, meanwhile, the roof of a seaside Roman palace destroyed by a volcanic eruption more than 2,000 years ago has been restored by scientists.

Broken timber from the brightly-coloured three-story building was unearthed by archaeologists working on a beach near the ruined city of Herculaneum in Italy.

Scientists were able to restore the palace's red, blue, yellow and green roof tiles by analyzing paint traces from the recovered timber.

The House of the Telephus Relief, a grand mansion, is believed to have been home to Marcus Nonius Balbus, the Roman governor of Crete.