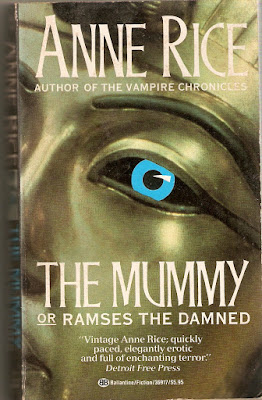 FOR the past few months, openly gay author Christopher Rice (The Snow Garden) has been hinting that he and his mother, celebrated writer Anne Rice (The Vampire Chronicles, The Lives of the Mayfair Witches), would be working on their first collaboration together, apart from their work together on the upcoming Vampire Chronicles television series.

Finally, this week the Rices made the announcement that their first book written together will be a sequel to Anne Rice's 1989 novel The Mummy, or Ramses the Damned.

This jointly authored book will be titled Ramses the Damned: The Passion of Cleopatra. The novel is set to hit booksellers in November of 2017.

And if you pre-order a copy now, you can take part in a special promotion to receive a signed page from the original manuscript!

For longtime fans of Anne Rice, this news has been a long time coming. The original Mummy novel ended with the teaser statement "The Adventures of Ramses the Damned Shall Continue." But no book ever followed, as Rice focused more on the continuing adventures of the Vampire Lestat and the Mayfair Witches, as well as several ghost novels and a few Christian-themed books.

The Mummy did get a comic book adaptation back in the '90s, as a 12-part comic book series from publisher Millennium Comics, which featured some very evocative cover art.

At one point, James Cameron bought the rights to the novel to make a movie version, but for one reason or another it never happened (probably because of confusion with Universal's own series of Mummy movies starring Brendan Fraser).

In this week's announcement, the Rices hinted that there may be a TV mini-series future for Ramses and company before too long, so that's something else Rice fans may possibly have to look forward to.

Are you excited to see the adventures of Ramses continue? Let us know down below in the comments.