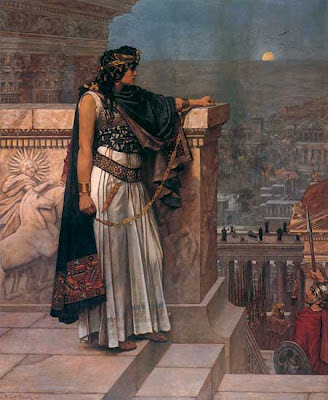 PALMYRA is in the headlines as the sad target of destruction by vile and hated DAESH barbarians.

But when they were there 1,800 years ago ingenious "terra-farming" kept the desert at bay, according to new findings.

The painting above is entitled "Queen Zenobia's Last Look Upon Palmyra" by Herbert Schmalz.

According to a new study, Palmyra was a miracle of human ingenuity and "terra-farming" which could serve as a model for water-thirsty urban areas today such as Phoenix, Arizona. Palmyra was surrounded by a number of villages that fed the city and together they harnessed rain water resources necessary for survival. 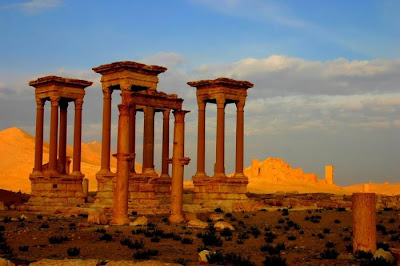 "It grew steadily in importance as a city on the trade route linking Persia, India and China with the Roman Empire, marking the crossroads of several civilisations in the ancient world," UNESCO says about Palmyra on its official Website.

Palmyra is still at a crossroads of history, and fighting between Syrian government forces, DAESH criminals and insurgents has damaged ruins at the ancient site.

Posted by Hernestus at 3:29 PM