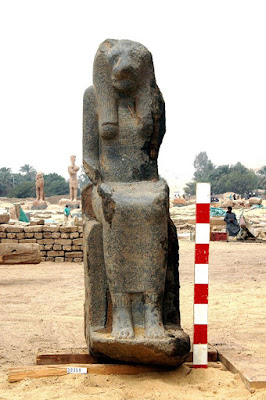 A cache of eight statues of the Egyptian goddess Sekhmet in black granite has discovered at the temple of Amenhotep III in Western Thebes.

Six of the statues represent the lion-headed goddess seated on a throne and holding a symbol of life in her right hand. Among them three are almost complete, one upper part, and two others are lower parts.

The maximal height is 1.90m, the width 0.51m and the depth 1.00m, according to the members of The Colossi of Memnon and Amenhotep III Temple Conservation Project directed by Hourig Sourouzian.

Two other middle parts of statues represent the goddess in standing attitude. They are headless and the lower parts are missing. The goddess is depicted holding a papyrus scepter in the left hand and a life symbol in the right. 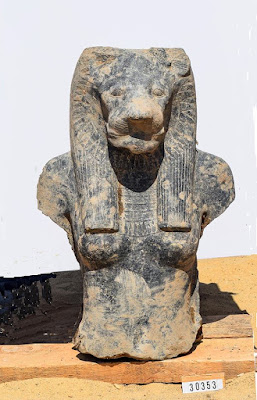 Many similar statues have been discovered in the temple of Amenhotep III during the past seasons.

They were all surrounding the large peristyle court and the hypostyle hall of the vast temple.

Each statue is a masterpiece of sculpture, combining the head of a lion with the body of a woman wearing a tripartite wig and a long, tight-fitting dress.

Like a true-life lioness, Sekhmet was a terrifying goddess to Egyptians ... bringer of war and pestilence. However, for her friends she could avert plague and cure disease.

She was the patron of Physicians, and Healers and her priests became known as skilled doctors. As a result, the fearsome deity sometimes called the "lady of terror" was also known as "lady of life". 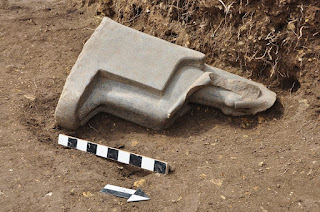 Sekhmet is mentioned a number of times in the spells of The Book of the Dead as both a creative and destructive force.

But above all, she is the protector of Ma'at (balance or justice) named "The One Who Loves Ma'at and Who Detests Evil".

Hundreds of statues of Sekhmet were buried by priests at temples in Thebes to act as "storage batteries" of protection. These new statues will be exhibited to the public.

All these statues, when cleaned, desalinated, and fully documented, will put on display in the temple when the site will be opened to the visitors after being completely protected by a fence and secured.


Two similar statues discovered in the temple a century ago are now kept in the Egyptian Museum.