SPECTACLE OF GLADIATOR GAMES
LIVE IN LONDON THIS WEEKEND 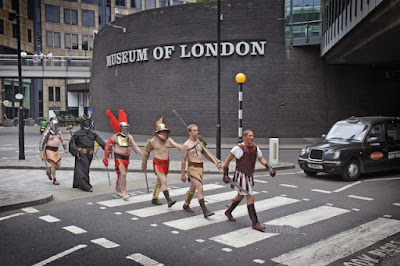 THIS weekend marks the dramatic conclusion of Roman gladiator games performed live at London’s only Roman amphitheatre ... re-enacted by the team who worked on Ridley Scott’s epic.

A gladiatorial arena was created in the Guildhall courtyard in the City — above the remains of the amphitheatre, which was discovered during building work in 1988. 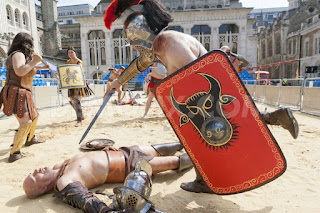 The group performs battles inspired by images from 1st century AD paintings, mosaics and coins, as well as commentaries from the period.

People also get the chance to build and fire a catapult. Visitors can view the amphitheatre’s remains, which are open all year round.

The games follow an inaugural event four years ago which proved a huge success, said Roy Stephenson, head of archaeological collections at the Museum of London.

“We have always prized ourselves on making ordinary history come alive. This goes that next step,” he said. “We come at it with a certain tongue in cheek. I do remember from last time that the guards from Britannia do whip up a bit of a bloodlust. 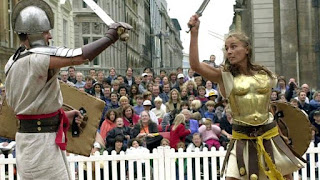 “We’re sticking our necks out because there are more shows than in 2011. We’re hoping people will enjoy the games, go and view the amphitheatre, then come and look at the museum galleries a short walk away.”

He added: “One of the things that fascinates me is that there is an open space now in the courtyard in front of the Guildhall, which reflects an open space that was there in Roman times.”

The amphitheatre was built in about AD70 and upgraded around AD120. It was 100 metres long and 85 metres wide and would have held up to 7,000 spectators.

Gladiator Games began August 8 and end August 16. Tickets are £15 for adults, £10 for children and £40 for a family. Visit museumoflondon.org.