CHILDREN HELP STONE GAY MEN
IN YET ANOTHER DAESH EXECUTION 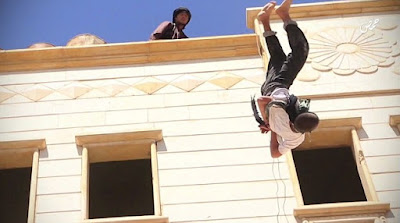 A gruesome new video has emerged showing DAESH Islamic State jihadists executing two men whose only crime' was being gay.

It is the latest in a grisly series of such gay execution videos. Last month, DAESH released a video showing two men accused of being gay THROWN OFF A BUILDING and then stoned by a crowd in Palmyra, a city visited by Antinous. 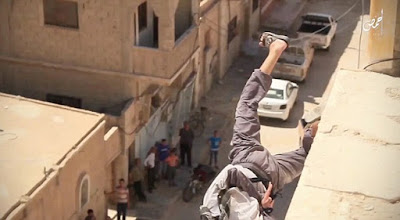 The new video shows two men being thrown to their deaths from a roof in Homs, Syria, before being stoned by a bloodthirsty and baying mob ... which included children.

It goes on to show the killers apparently conducting the rituals of an Islamic burial ... only to be dumped in an unmarked grave.

The murders are the latest in a string of rooftop 'executions'.

It is the so-called Islamic State preferred method of murder for the men they suspect of being gay, an 'offense' which is punishable by death. 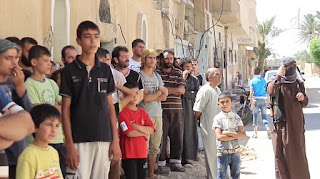 This latest shocking video ... which runs to over six minutes ... shows the proclamation being read out in front of a captivated audience, who have crammed into the street, lining the walls as they awaited the gruesome execution.

The warped justifications for the murders say they can be carried out on the grounds of religion ... as are the rapes of 'non-believers', like the Yazidi girls.

The two men are then led, blindfolded, across the roof, before being thrown to their death after being made to teeter on the edge by their evil captors.

The moment the doomed men hit the ground is not shown, but the crowd ... which had been waiting expectantly ... are shown surging forward to stone the men as as they lie twisted on the floor.

The blood-spattered rocks are seen on the ground alongside the bodies. 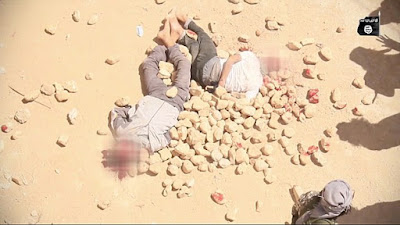 The video then cuts to the bodies being washed, in accordance with Muslim tradition, before being wrapped in a white shroud.

The shrouds quickly become soaked in the blood of the dead men, who are carried by their killers and dumped together into a shallow grave in the dusty ground.

The bodies are then covered up, leaving nowhere for the families to go to mourn their loved ones.

The United Nations Security Council will this month hold its first ever meeting on LGBT rights ... to tackle the issue of the terrorist group’s persecution of gay people.

US ambassador to the UN, Samantha Power, told reporters the meeting will focus on “ISIL and its systematic targeting of LGBT (Lesbian, Gay, Bisexual and Transgender) persons who find themselves in ISIL-controlled territory.”
The meeting will be hosted by the US and Chile, and all member states interested in LGBT protections will be able to attend.