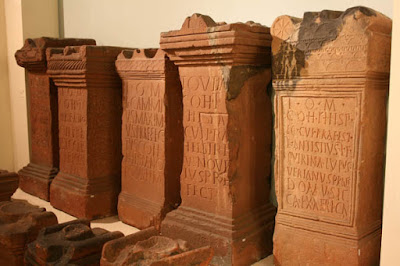 A unique and irreplaceable Roman altar which is at least 1,600 years old has been stolen from a museum in England.

Staff at the Senhouse Roman Museum in Maryport are devastated at the loss of the small altar. They also fear it may have been damaged during the theft because it was forcibly wrenched from iron clamps, which have been bent. 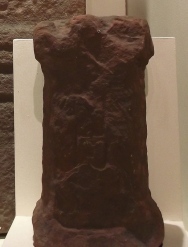 The altar is small, 25cm long and 13cm wide, and is made of red sandstone. It was on display in the main gallery of the museum when it was stolen during opening hours last Thursday.

Jane Laskey, the museum manager, told the NEWS & STAR newspaper: “The issue of course is that we have the collection on display for visitors and we don’t have a lot of our things in glass cases because we like people to get close to them.

“It is absolutely devastating that somebody who has visited the museum has taken one of our really very precious objects.”

The altar was discovered at the Maryport Roman site in 1880. A stick man with a square body and little lines for arms and legs is inscribed in the red sandstone.
Like all Roman altars, it has a little dish in the top where the Romans would have poured their libations – their offerings to the gods.

It was among a cache of 18 Roman altars was found in 1880 ... and more have been found since then, including A STONE ALTAR only a couple of years ago.

The site at Maryport is a big source for artefacts from Roman Britain. New discoveries are found all the time: CLICK HERE.

This is the first time anything has been stolen from the museum, which is now reviewing its security.

Police are looking into the possibility that this theft is related to a similar theft at another Roman museum in England. Only a few weeks ago, someone STOLE A PRICELESS ARTEFACT from the Vindolanda Trust museum.