PALMYRA TEMPLE SEEN BY ANTINOUS
BLOWN UP BY DAESH BARBARIANS 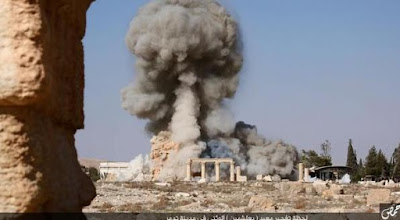 THESE are the first images of the Baalshamin Temple in Palmyra Syria which DAESH Islamic State barbarians have blown up, in what the United Nations has called a "war crime".

Antinous and Hadrian visited Palmyra, fabled "Garden City" of the desert and most definitely saw this temple in its full glory. 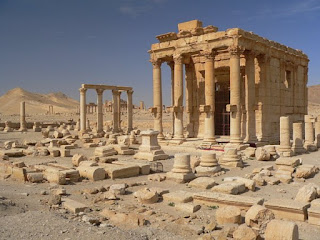 The photo at right shows how impressive even its ruins were prior to its being blown to bits by DAESH (top photo).

We know Antinous and Hadrian saw it because records say that Hadrian personally ordered a vast expansion of the temple.

News of the destruction of the temple comes after relatives and witnesses said Wednesday that Khaled Asaad, an 81-year-old antiquities scholar who devoted his life to understanding Palmyra, was beheaded by DAESH militants, his bloodied body hung on a pole. He had even named his daughter after Zenobia, the queen that ruled from the city 1,700 years ago. 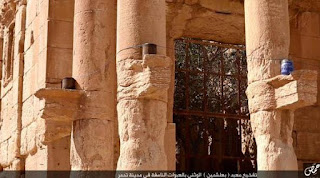 The fate of the nearby Temple of Bel, dedicated to the Semitic god Bel, was not immediately known. ISIL supporters on social media also did not immediately mention the temple's destruction.

ISIL members have also  looted and vandalized a museum in the Iraqi city of Mosul and have massively damaged the ancient cities of Hatra and Ninevah, both UNESCO world heritage sites. 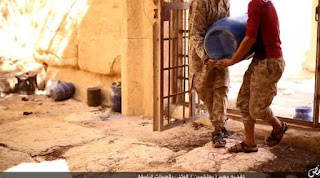 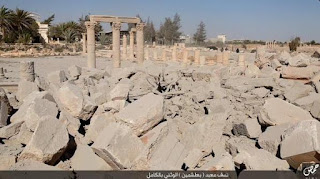 Only last week, DAESH released a video showing CHILDREN STONING two gay men to death after they had been thrown off a building in Homs Syria. It was the latest in a grisly series of such gay execution videos.

Posted by Hernestus at 2:41 PM