ONE of the places Antinous must have frequented in Rome was the Theatre of Balbus and adjacent gardens and markets ... one of the liveliest corners of Rome before a fire razed the area in the 2nd Century AD.

Now, archaeologists have unearthed a shrine and other finds at the garden courtyard, now called the "Crypta Balbi" (Crypt of Balbus), buried under the ruins.

The new excavations, described Friday, July 18th to the press by the Director Laura Vendittelli (State Superintendent of the Archaeological Heritage of Rome), have revealed a fullonica - workshop of the fullers, workers who washed clothes and linens - and a shrine (altar with sacred enclosure) dedicated to Greek and Eastern deities and the East. 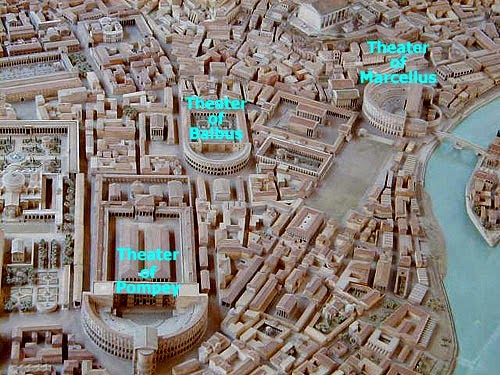 The theater was an ancient Roman structure in the Campus Martius of Rome.

It was built in 13 BC by proconsul Lucius Cornelius Balbus (minor), likely from the spoils of a military campaign by order of Augustus Caesar.

Excavations of the theatre began in 1981 and are still ongoing, however, the main portion of the crypta finished in 2000.

Today what has been excavated can be seen at the Museo Nazionale Romano Crypta Balbi (National Museum of Rome), which is located at Via delle Botteghe Oscure, 31, (corner of Via M. Caetani).

Few tourists ever stray into this museum. But it is worth an extra visit. The museum is located in what was the crypta or courtyard in the rear of the theater's complex behind the stage.

This courtyard was the smallest of all of Rome's major theatres. Here patrons would stroll between acts of a performance and seek refreshment.