WE TOAST ANTINOUS THE GAY GOD
DURING THE MINOR BACCHANALIA 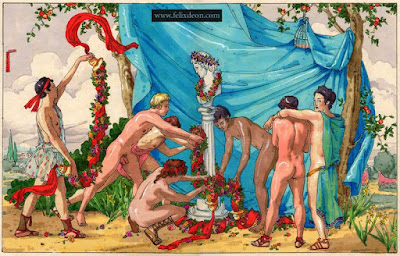 ON January 6th we celebrate the Minor Bacchanalia.

The lesser Festival of Dionysus is celebrated when the wine has reached fermentation. Traditionally a secret ceremony limited to women, but opened to men during Roman times.

It is the season in which Dionysus rules at Delphi and at Eleusis, though the full ceremonies of the Minor Bacchanalia were only performed once every two years.

Mythologically this is the occasion when the Titans lure and capture the child Dionysus, charming him with a mirror and toys. The Titans murder him, rend his limbs from his body and eat his flesh.

This is the first Wine festival and triumphal procession of the entourage of Dionysus whose arrival signals the Victory of Antinous over the forces of life and death as represented by the Archons.