THE SEMEN OF THE FIRST GOD
TRULY IS IN HIS BODY 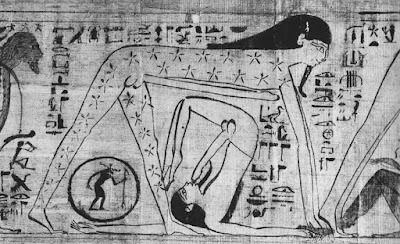 ANTINOUS must have heard the many wondrous creation stories which the Egyptians told him during that fateful journey up the Nile.

The Egyptians had many creation stories, ranging from dry land appearing in the midst of the primeval ocean to the "Great Cackler" laying an enormous egg.

If you've never heard about it, it's because Victorian and Edwardian Egyptologists were so shocked by it that they referred to it only in Greek or Latin footnotes — if at all.

For a hoot, read Wallis Budge's embarrassed attempts to tell the story in English using words no stronger than "onanism" and "seed".

Hernestus once knew a Harvard teaching assistant who taught Beginner's Hieroglyphs at the Cambridge Adult Education School and who delighted in titillating his students (mostly lonely-hearts straight women and a couple of gay men) by demonstrating reflexive verbs in Middle Egyptian with the sentence: "The God Loved Himself With His Hand" and assigning homework that involved copying out the text with particular attention to the glyph showing testicles attached to an erect penis with a fountain of semen gushing forth from its end.

Here's the gist of the story:


The Great Creator sits alone, having not yet created anything, when the creative urge comes upon him and his penis throbs into a massive erection, which he strokes to ecstatic climax, sending his silvery semen flying into his mouth, whereupon he speaks the magical words that create the first "neteru" (gods) and all the universe.

"In the Beginning was the Word" is the way the New Testament puts it in a somewhat more family-friendly version of the same story.

It is this "essence of magical creation," which the Egyptians call "heka," which invigorates everything we do. It is liquid heka which flows through the desert in the form of the annual inundation of the Nile, creating life from barrenness.

Budge and the others translated "heka" as "magic," which is misleading and simplistic. But then they also translated "neteru" as "gods," which is also misleading since English is such a young language (scarcely 1,600 years old) that its linguistic concept of "god" necessarily reflects Christian attitudes.

An Egyptian or a Greek or Roman of Antinous's day might have been more comfortable with Medieval infatuation with Spheres of Angels and Archangels or with the Catholic panoply of Saints. The Egyptians might have thought that more like the divine agents they called "neteru."

The "neter" associated with the annual inundation of the Nile is the transgender deity Hapi. To our mind, and we believe to the minds of the Ancient Egyptians, Hapi is one of the most wonderful and beautiful of the "neteru."

Hapi's most distinctive attribute is bluish-green skin and a towering headdress consisting of papyrus and lotus plants which seem to shoot out of the crown of Hapi's head the way those plants do from the waters of the Nile.

As a transgender deity, Hapi has a robust male physique with athletic legs, narrow waist, broad shoulders and sinewy arms.

But Hapi also has the pendulous breasts of a nursing mother and the round belly of an expectant one. Sometimes Hapi has the short-cropped hair of a man, but more often Hapy is depicted with long hair cascading over both shoulders almost to the waist.

Very strikingly, Hapi effortlessly holds before him/herself a platter heaped high with incredible amounts of crops, beverages, groceries and produce, often including casks of wine, sheaves of wheat and even entire sides of beef. 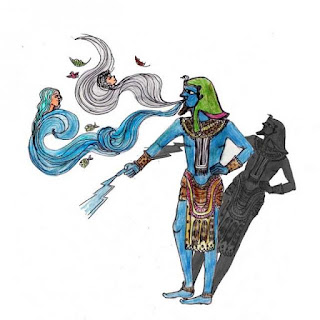 It is a popular misconception to try to fit Isis and Osiris into the roles of Mother Earth goddess and Great Father god who bring forth riches from a bountiful Earth. That is an alien concept to the Egyptians, for whom the Earth was a desert. Our own English word "desert" comes directly from the Ancient Egyptian "desheret" — meaning the "Red Land" of sunrise and sunset.

It was only divine "heka" flowing through this barrenness that permitted life to thrive in a verdant valley called the "Black Land" or "Kemet," from which the Arabs derived "al-Chem" and our words "alchemy" and "chemistry" come. 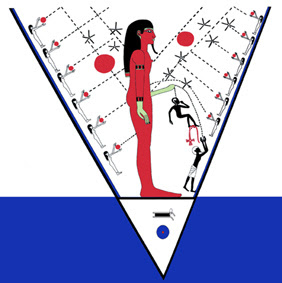 So when Antinous plunges into the Nile on that fateful October day, he becomes becomes one with Hapi. Antinous and the transgender source of all life merge and flow into each other.

Antinous opens his mouth and his nostrils and allows himself to be filled with heka which, after all, is the semen of the Great Creator himself.

The hieroglyphs on the OBELISK OF ANTINOUS proclaim that Antinous can assume any form his heart desires "for the Semen of the First God Truly is in His body!"

It's the ultimate seminal experience.

And it is Antinous's unique gift to us as gay men. He asks us to take the plunge with him and to explore what words like "god" and "magic" really mean.