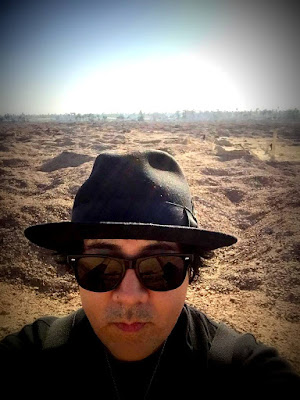 IN 2020, our spiritual leader Antonius Subia became the first priest of Antinous in 1,600 years to set foot in the sacred city of Antinoopolis, founded by Emperor Hadrian on the banks of the Nile in Egypt where Antinous died in the year 130 AD.

Another traveler recently visited Antinoopolis and uploaded a video tour of the city to YouTube (video at bottom of this entry). Here is Antonius Subia's interpretation of the video:

This is a video of a man exploring Antinoopolis.  It would have been nice if we had made an exploratory video like this, but I was far too absorbed in taking in the city and feeling the presence of being there to have made a video about it.

Unlike him, the police insisted on accompanying us with an armed guard carrying machine guns supposedly for our protection, though I now realize that wasn't what it was about at all, the locals are completely harmless and were delighted to see foreigners.

We spent our time exploring the Temple of Rameses II and then tracing the layout of the "cardo" or main avenue of the city, which was more intact than I expected, with long tracks of intact paving stones, limestone curbs and granite columns laying pretty much where they had fallen making the avenue easy to imagine. 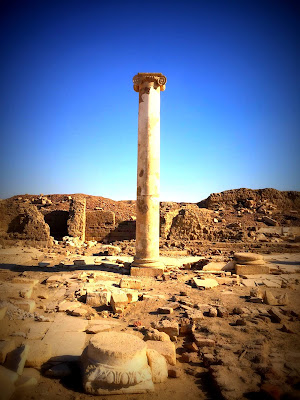 I see now from satellite photos that the southern end of the avenue appears to be even more intact than the northern end and I hope to see that side in the future.  From there we asked to be taken to the columns that could be seen in the distance, which I thought might be where the east-west avenue ran, but turned out to be further past it, on what would have been a minor side street of the city.

From the layout I could see that it was a Christian church which had only been reconstructed a few years earlier and does not appear on any of the historical maps.  The columns of the church were moved from other parts of the city during the Bizantine era.  All around were decaying mounds of brick walls one of which I climbed to get a better view of the city.

From there in the distance I saw the Hippodrome. A man was about to enter (who knows why) and he gave the scale of what I was seeing, showing that just the dirt remnants of the Hippodrome are at least two stories tall, meaning that when the limestone seats where intact it may have been twice that size.

The French Jomard expedition estimated that it could have held at least 60,000 spectators. It was comparable in size to the Circus Maximus of Rome and served the same function and even as a ruin is comparable to the Roman chariot racetrack. 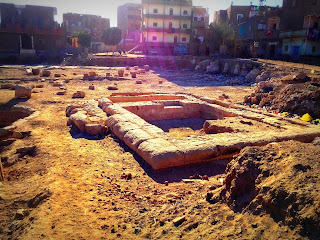 Unfortunately the local people have destroyed half of it with bulldozers to extend their cemetery.

The guards wanted us to leave but we insisted that they take us to the recent excavation site of what is believed to have been the ANTINOEION, the sacred temple of Antinous which was recently excavated.

What is striking about the site is how small it seems. But then you see the enormous granite columns, which were only preserved because they could not be destroyed to make mortar in the 19th Century when Antinoopolis was obliterated by the Turks.

The temple occupied the area of about half the size of a standard city block. But the columns indicate that it was tall and stretched upward to the sky.

It was a really powerful experience to be there and take it all in and be able to communicate this energy to everyone who believes in Antinous.

In the video the man explores an area of well intact mud-brick ruins, which are actually not part of Antinoopolis proper, but are the remains of the southern annex constructed at the high point of the city, like a suburb also surrounded by its own extended wall, which we saw as we drove away from the city. 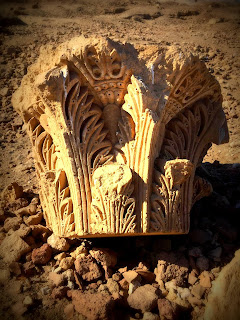 He keeps saying asking what kind of rock it was, not knowing that it was just mud adobe melting away under the occasional rain that the area receives.

He also makes reference to the people carrying water from the well to "the village" not understanding that Antinoopolis was a major city, essentially an exclusive gated community for the rich, which Hadrian marketed to Greek Alexandrians like a modern real-estate agent.

While I am not aware of evidence that the city had running water or a sewer system, I am sure that the citizens did not carry their own water from a well.  There was a fully functional bathhouse located hundreds of yards away from the river which must have had some way of water coming in and out which has yet to be explained. 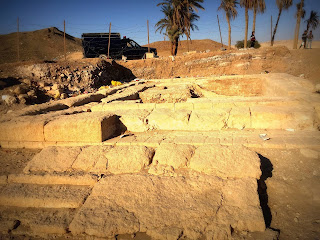 The reason why central Antinoopolis has completely disappeared is because it was built of limestone, which was thrown into the lime-kilns by the Turks, whereas the mud-brick buildings of the southern annex are more intact because they were not made of stone.

The video however is great because it shows a sweeping visions of what little is left of our sacred city.  The millions of pottery shards that are everywhere on the site are a sign of the extreme wealth that passed through the city.

He makes the extraordinary claim that you can still smell the frankincense that was once carried in the amphoras, which might be true. They may also have carried precious olive oil or wine, but there are millions of shards everywhere. 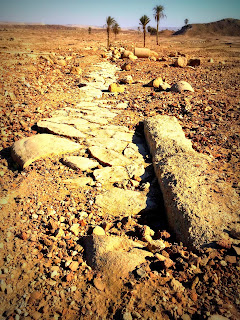 Albert Gayet claimed to have found 500,000 clay offering to Antinous buried in the sand, perhaps these clay shards represent some of them. I would love to see just one of these offering that he found.

The only offering I know of is the Love Spell from the later period, long after the christians took over where a dark magician buried a clay pot with a female figure pierced with lead pins and a lead scroll asking Antinous to help a man make a woman be his sex slave, which is now housed in the Louvre.

Now that I have been there and understand the city better, I can see the outline now and the traces of the side streets that cross the city.  As we drove away I kept pointing out features and our guide said "It seems like you know your way around as if you are from here."...I answered...its because I am from here.

I am from Antinoopolis.
~ANTONIUS SUBIA
Here is the video:
Posted by Hernestus at 12:00 AM