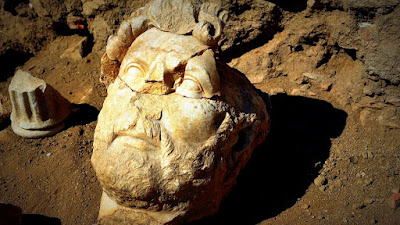 IN what is being called one of the most important archaeological discoveries ever in Turkey, experts have unearthed pieces of a 2.5-meter-tall statue of Hadrian in the ruins of the ancient city of Alabanda, which the Emperor visited.

Works are continuing to find the other parts of the marble statue, which has six parts, including some parts of its head and body. The 2.5-meter-tall statue will be brought to the Aydın Archaeology Museum after works are completed.

“The area, where the statue fragments were found, is the ancient parliament building. It is one of the largest parliament buildings in Anatolia. We care about exhibiting the artifacts on their site. When the statue is completed in the next few seasons, we will probably see many visitors here thanks to this statue, which is rare in the world,” Aydın Provincial Culture and Tourism Director Umut Tuncer said. 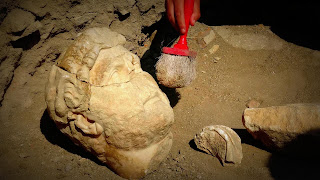 "Last year, we accelerated the work in the billiardium [council building], which is one of the three important regions here. This year we found fragments of the armored emperor statue, which we call ‘portrait sculpture.’ The parts of this statue were found in different places. It will be one of the important artifacts in the museum. Hadrian was one of the emperors in the Roman Empire who visited the country the most. He also had many expeditions to Anatolia. We think that there is an inscription of honor next to this statue, which we think was made for the arrival of Hadrian, who ruled between 117 and 138."

Speaking to reporters, Ali Yalcin Tavukcu, a lecturer in the Department of Classical Archaeology at Ataturk University, said the statue was thought to be around 1,900 years old and was likely created for Hadrian's visit to the city in 120 CE.

"For more detailed information about the statue, we are working to find inscriptions containing honorifics," he said, according to Anadolu Agency.

"The statue, which we found in six pieces, will be one of the most important works in the museum."

"There is very little like the statue in the world. We are very happy in this sense," he said, according to Anadolu.

The statue, thought to have been 2.5 metres tall when intact, will be put on display at the Aydin Archeology Museum after work on it is complete, the news agency reported.