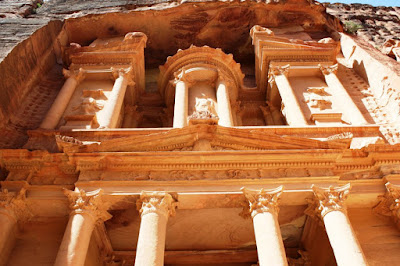 EXPERTS have made an astonishing find at Petra, the fabled caravan trade route crossroads city which Antinous and Hadrian visited on their way to a rendezvous with destiny in Egypt.

They have revealed a startlingly advanced irrigation system and water storage system that enabled the desert city's people to survive ... and to maintain a magnificent garden featuring fountains, ponds and a huge swimming pool.

The engineering feats and other luxuries attest to the ancient Nabatean capital's former splendor and wealth some 2,000 years ago.

Earlier a GIANT MONUMENTAL PLATFORM was discovered just a kilometer from the ruins of the city in Jordan. The archaeologists describe the unparalleled find as "a large rectangular platform" that measures 55 meters by 50 meters (184 feet by 160 feet) and was essentially "hiding in plain sight."

Petra is perhaps best known for its sandstone canyon that leads directly to Al Khazneh, The Treasury, seen in the climax to "Indiana Jones and the Last Crusade" where the heroes, played by Harrison Ford and Sean Connery, ride out of the canyon and into the Treasury in their quest for the Holy Grail. 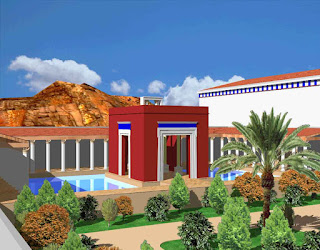 However, 2,000 years ago, Petra was renowned for completely different reasons.

It was one of the most famous water stops in the Middle East, where camel caravan routes linked distant cities.

Now archaeologists are discovering the Nabataean capital, situated in the southwestern deserts of Jordan, once was adorned with an exquisite, artificially irrigated garden.

It featured paths likely shaded by vines, trees and date palms, and grasses, which were cultivated next to a huge, 44-meter wide swimming pool.

The Nabataeans’ ability to tame nature, and conspicuous consumption of a precious resource, water, was pure propaganda.

It was a means to display wealth and power, which they could do thanks to the ingenious hydraulic system they invented, which allowed the people not only to reserve enough water for their own needs, but to water the lavish garden with fountains and an open-air pool. 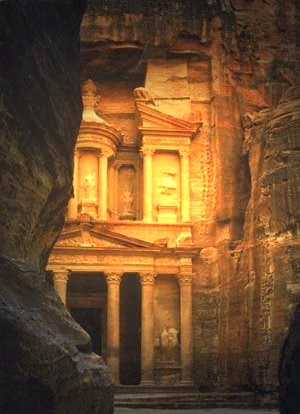 It had previously been unthinkable that water, a scarce resource in the desert wastes, would have been used for anything but necessity.

"The pool marks the terminus for an aqueduct that transported water from one of the springs, 'Ein Brak, located in the hills outside of Petra," Leigh-Ann Bedal, anthropologist from Penn State Behrend College, told Haaretz. "The pool’s monumental architecture and verdant garden served as a visual celebration of the Nabataeans' success at providing water to the city center."

Ongoing excavations in Petra have uncovered a shaft that appears to have led water more than 10 meters downward, from the aqueduct system to the pool level.

The archaeologists have also found underground channels that helped control runoff during the rainy season, revealing the true complexity of the system for the first time.

Occupied since prehistoric times, the lost Nabataean civilization made the part-carved, part-built city their capital and a major caravan center of trade from the 4th Century BC to the first century AD.
During Hellenistic and Roman times it became a major caravan centre for the incense of Arabia, the silks of China and the spices of India ... a crossroads between Arabia, Egypt and Syria-Phoenicia.

Hadrian and Antinous stopped at Petra on their way from Antioch to Alexandria.
Posted by Hernestus at 12:00 AM