THE SCENT OF ANTINOUS 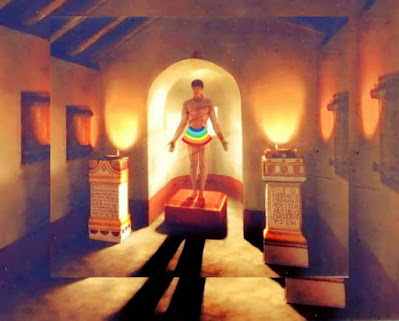 FOR Pride Month, an aromatherapist and parfumier in Brazil shares this image of Antinous/Antenociticus adorning a small temple in Newcastle England.
He adds this poem:

THE SCENT OF ANTINOUS
When contemplating the beauty
of your divine body
adorning the altar
in this ancient temple
my heart calms down
When smelling the perfume
of your bare skin
Saturating this sacred space.
Poetry by Edhie Laureano Pires Yata'wá
@yatawamirim (Instagram) 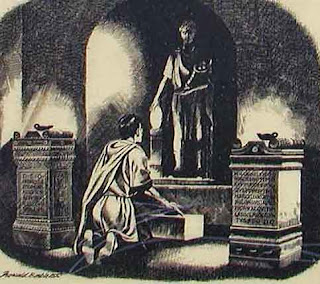 This small temple is dedicated to a curly-haired boy god called ANTENOCITICUS ... a deity worshiped by soldiers and local people at the eastern end of Hadrian's Wall.
Antinous in the guise of Antenociticus is not mentioned at any other Romano-British site or on any inscriptions from Europe, which is why it has been identified as a local deity.
Antinous priest and writer MARTINUS CAMPBELL, author of THE LOVE GOD about the life of Antinous, says it is highly possible Antenociticus is a local aspect of Antinous ... perhaps in honor of a visit to this outpost by Antinous and Hadrian. 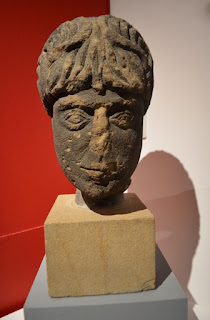 Martinus says: "Archaeologically there is a period of time in AD 126 to 127 when we have no record of where Hadrian was. We do know, however, that the wall was completed in Ad 128."
He says: "It is believed he would have come to Britannia to oversee the final stages of the wall. It is further believe he would have brought Antinous with him."
Martinus adds: "That is why the locals (mostly of mixed Roman and British blood, by then) connected Antinous to a local deity Citicus and re-named him Antenociticus."  Stone heads of Antenociticus have been found nearby.
Posted by Hernestus at 12:00 AM