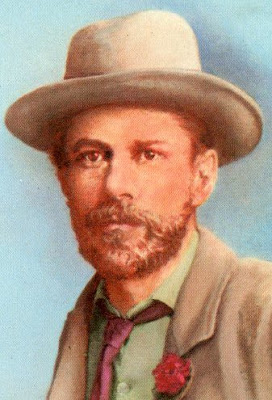 THE last of our three Uranian Patriarchs, Edward Carpenter was born in Brighton England on the 29th of August, 1844, to a very large middle-class family.

While his brothers went into the military, Edward became a scholar, with great success and eventually even taught at Cambridge where he was required to become ordained as a curate of the Anglican Church.

It was at this time, when he was 24, that he first read Leaves of Grass by Walt Whitman and was completely changed. He resigned his position at Cambridge and devoted his life to the working class, becoming a Socialist philosopher, lecturing, organizing and speaking for working men.

When his parents died, he received an inheritance that he used to purchase a rural estate at Millthrope, which he turned into a veritable Socialist Commune. He repressed his homosexuality for much of his life, channeling his desire into politically inspired friendships.

But the Millthrope house gave him the freedom to express his feelings more openly, and he began to write books on the subject of Uranian Love. He was deeply influenced by Hindu spirituality, and visited India, all of which emerged in his spiritual view of the Socialist movement, which was not so much about political revolution, but directed towards a change in human consciousness, of which homosexuality rapidly became his greatest cause.

While returning from India he met George Merrill on the train. It would be the love of his life. The younger man soon moved into the house at Millthrope, the two became inseparable lovers whose relationship lasted over forty years.

In 1908, he published The Intermediate Sex, the first widely available book on the subject of homosexuality. After the death of John Addington Symonds, with whom he had been closely allied, Edward Carpenter assumed the role as torch bearer, and subsequently published dozens of books and essays for the cause of gay liberation.

He died on the 28th of June, 1929, in Guildford England, and though not widely known at the time, was to later become a spiritual patriarch for the gay liberation movement of the late 1960s and '70s. He is regarded as a Saint and Patriarch of the Religion of Antinous, and remembered as one of the first fathers whose work changed the world with subtle power.