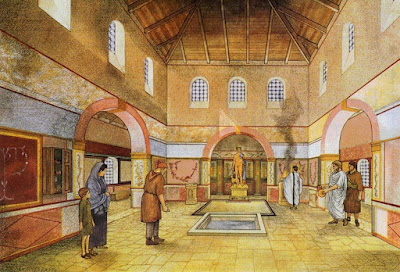 AN unprecedentedly large Roman temple unearthed in northern France which dates to the 2nd Century AD in the heyday of the Religion of Antinous could potentially be an Antinous Temple being found, or at least a shrine or chapel (aedicula) to Antinous within a temple.
Experts caution, however, that they do not yet know to which deity or deities this temple was dedicated.
This is the largest provincial temple found in France. It measures 70 meters by 105 meters and has two small pavilions in the back, of which only the foundations remain.
In the center, the "Cella," visitors could access a dramatic masonry platform via a front staircase.
Here in the heart of the temple, the ancient Romans would have erected the statue of a deity.
Archaeologists have discovered many elements of the artwork inside the sanctuary, including clashed spears and marble veneer.
The entrance to the temple was a monumental façade measuring 10 meters high and 70 meters long, which made it an exceptional structure in Roman Gaul.
This façade consists of 13 to 17 arches, above which the Romans surmounted an entablature and, exceptionally, a frieze that should include a dedication in bronze letters.
A few decades after its erection, the façade collapsed in one piece perhaps due to a defect in the foundation related to the nature and slope of the ground, which caused a mess of thousands of blocks and fragments.

Archaeologists intend to study these fragments to gradually restore the original appearance of the sanctuary.
The ornamentation, sometimes enhanced color reveals carved decorations: Greek meanders, foliage, animals, and images of several deities, including Venus, Apollo, and Jupiter.
Within the entablature, its most unique sequence is the frieze decorated with deities from the Greco-Roman Pantheon, such as a crouching Venus alongside the head of an old woman.
This sculpture recalls an episode told by Homer in The Odyssey. After an affair with Mars, Vulcan’s wife retired to the woods. An old lady informed the gods, who sought the place of her retreat.
To punish her, Venus turned the old woman into a rock. At the top of the façade, one of the most remarkable features is a decoration of monumental heads, which measure three times larger than human size, with complex hair and eyes that had once consisted of colored stones.
Among them, the head of Jupiter and a series of griffins with outstretched wings sit along yet-undetermined gods … could Antinous be one of them?
Posted by Hernestus at 12:00 AM