ANTINOUS IN THE STRANGEST PLACES
EVEN AT THE SUPERMARKET 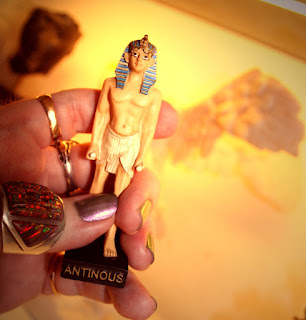 ANTINOUS shows up in the most extraordinary places ... even at the supermarket magazine rack.

Some years ago, Hachette published a magazine series entitled THE GODS OF ANCIENT EGYPT which featured special issues on scores of Egyptian deities ... nearly 100 in all.

Each edition featured a glossy brochure and an epoxy resin figurine in a little plastic "display case." The magazines were widely available at booksellers and newsstands around the world.

Antinous was featured in Issue 88 — possibly the most collectible issue in the whole series.

The Hachette magazines have long since gone out of print, but the figurines are still found on eBay and other online marketplaces.

Antinous is hard to find, but occasionally he turns up and the bidding turns fierce as ANTINOMANIACS fight to possess the little 4.5-inch (14 cm) figurine. 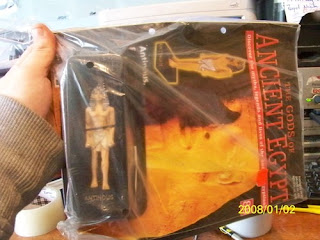 The one pictured here sold on eBay for nearly $50 in "NRFB" condition — "Never Removed From Box."

It is "only a fake" of course.

But that does not make it any less sacred or magical to anyone who loves Antinous.

In ancient times, Antinous figurines, images, coins and medallions were prized by his worshipers as a sort of portable Sacred Token or Pocket Shrine.

In his authoritative book about Antinous, BELOVED AND GOD, Royston Lambert points out that in ancient times many followers of the Blessed Youth felt it was necessary to have a tangible representation of Antinous with them at all times for protection and for blessings:

"Some of the devotees evidently could not bear to be parted from the beneficial and reassuring presence of their Antinous and therefore had small, light-weight travelling busts or bronzes made to accompany them on their journeys."

Poor people made do with more crudely made representations, such as coins and figurines and medals made of lead, clay and other base materials. The demand was so great that there was a rife trade in which we would nowadays call "copyright piracy" among artisans turning out "illicitly yet more crude and cheap medallions of this hero whose images, miracles and protection were obviously sought by countless poor folk of faith." 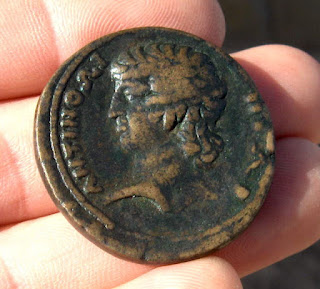 People of modest means who were lucky enough to get their hands on one of his clay figures or commemorative coins would carry them with them for protection, often even wearing them:

"Many were pierced by holes and hung from the neck as talismans: Antinous' image offering protection against evil, sickness and death," says Lambert.

Other such tiny statuettes, figurines, coins and medallions were placed in portable shrines or pouches or adorned away-from-home altars, and others were buried with the dead "to invoke the god's aid on the perilous journey into the unknown."

We look at the little Hachette Antinous figurine and see only a cheap epoxy resin plastic action figure, crudely hand-painted in some Chinese sweat shop.

But imagine how the Ancient Priests of Antinous would have gaped in wonder at this little figurine swaddled in cellophane, along with a book of shiny pages unlike any papyrus, pages adorned with inscrutable glyphs and breathtakingly realistic images.

Where we see ordinary plastic, the Ancient Priests would see a wondrous statuette fashioned in what to them would be a magical putty-like material not like anything found on Earth.

Clearly, it was fashioned by the Gods themselves — clearly, ANTINOUS THE GAY GOD truly is "immanent" (in-dwelling) in this miraculous vessel.

And the Ancient Priests would, of course, be absolutely right.