IT in November of the year 129 AD that the Imperial entourage of Hadrian and Antinous arrived in the sacred city of Hierapolis in Asia Minor (Turkey) on what would be one of the last festively upbeat stops on the emperor's fateful final tour of his sprawling empire.

Hieropolis was the City of the Sacred Prostitutes, including gay prostitutes.

Today only scattered ruins remain, including those of the amphitheatre which was built in honor of the Divine Hadrian's visit in late 129 and early 130. 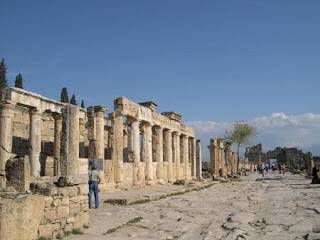 But in its heyday, Hierapolis was a city of 100,000 inhabitants and was noted for its fine temples and, above all, for its healing thermal springs ... hot springs which to this day continue to draw people seeking healing relief.

Apollo was the chief god of Hierapolis, along with Pluto, whose healing energies fed the miraculous thermal springs which were famed throughout the Roman Empire.

But the most extraordinary temple in this Sacred City of Temples was indeed the Temple of Astargis, a Hellenized form of Astarte-Venus. 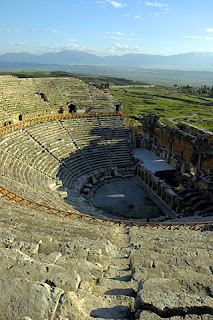 The Temple was famous (or "infamous" in the view of early Christians) for its sacred prostitutes, the "hierodules", who were priestesses of the love goddess.

The Bible mentions Hieropolis briefly as an iniquitous site of whoredom and wickedness, an obvious reference to this Temple. The Christians did their worst to convert the city. Paul came here.

And the Apostle Philip proselytized in this city for three years before finally being stoned to death. He was buried in Hieropolis.

Like the thermal waters seething in the Plutonium, Hieropolis was a seething hotbed of religious turmoil.

Hadrian and Antinous arrived in Hierapolis to a joyous welcome. 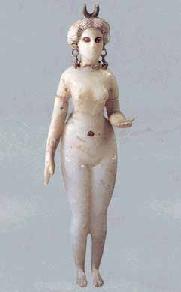 Because of his devotion to the Goddess Venus, Hadrian most certainly would have visited the Temple that was the center of a large, wide-spread cult ... the Temple of Astargis, a Hellenized form of Astarte-Venus ... the temple of the sacred gay prostitutes known as "hierodules."

The temple was an imposing edifice whose portals were flanked by towering phallic sculptures. Inside, the temple catered to every sexual persuasion.

Yes, there were also homosexual sacred prostitutes, who likewise served the goddess to the best of their ability.

Flamen ANTONIUS SUBIA believes the connection between their office and the function of Antinous as the lover of Hadrian may have facilitated his initiation into their cult. Thus, Antinous may have been an Honorary Sacred Prostitute.

In the words of Antonius:

"Hadrian and Antinous paid homage at the Temple of Atargatis, a Hellenized form of Astarte-Venus, known to the Romans as Dea Syria, in the city called Hieropolis, or the Holy City. The ancient temple of Atargatis was famous for its sacred prostitutes, the hierodules, who were priestesses of the love goddess that served as sexual vessels for the adoration of the men.

"There were two giant phallus statues in front of the temple like obelisks, which bore an inscription saying that they had been erected by Dionysus on his way to Ethiopia.

"Once a year two devotees would climb to the top of the phalluses and remain there without sleep for seven days in the same way that Simeom Stylites climbed his column to be closer to the gods.

"Hadrian would have visited the Temple because of his devotion to Venus and because the temple was the center of a vast cult of the goddess Dea Syria that had spread all throughout the world reaching Rome and North Africa, and Gaul.

"There were homosexual sacred-prostitutes, who served the goddess, and the priests of the temple were transgender eunuchs like the Galli of the Great Mother Cybele with whom they had much in common and may even have been a denomination.

"Apollodorus of Rhodes writes of them as mendicants who traveled together as beggars and they were seen by Augustine of Hippo in North Africa doing their ecstatic dances playing drums and cymbals.

"Though it is clear from his heroic proclamation at Heliopolis that Antinous was a willing lover of Hadrian, he was accused of being Hadrian's sex slave by the early Christians, and so Antinous has been connected to prostitution from the very beginning.

"We honor the ancient cult of Atargatis of Hieropolis out of love for the sacred female and male hierodules and for the transgender mendicant priestesses who spread the cult of the goddess to the world.  May Antinous the god of prostitutes bless and watch over his people."