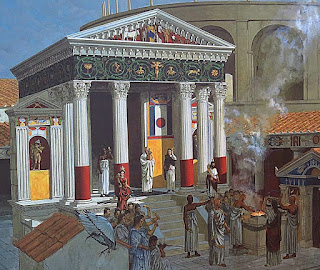 THE birthday of Antinous is November 27 and worshipers all over the world are planning celebrations.

But some people are unable to celebrate as expansively and as joyously as they would like.

We received the following succinct smart phone message yesterday from a very dear adherent of Antinous in the American Bible Belt who said:

"I am a bit envious that you get to celebrate his birthday openly. I've got two straight housemates. Oh well ... maybe some day ...."

And like many people, he also has to work on that day ... and others have to work perhaps at two jobs to make ends meet. And then there are the people who just don't have the money or the facilities for a formal celebration.

There is a common misconception that you need to have a large and elaborate ALTAR OR SHRINE in your home. But the truest shrine is in your heart. You can download a photo of Antinous and put it in your wallet ... and it truly becomes Antinous the Gay God if you see HIM in it.

A shrine or sacred image of Antinous can be very SMALL AND MODEST.

The Ancient Priests of Antinous were experts in such things ... though 1,800 years of Christianity has resulted in that knowledge having become lost for the vast majority of people in Western civilization. 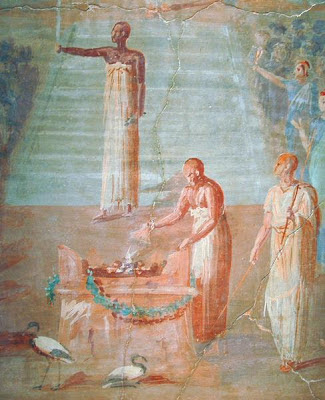 For the Ancient Priests of Antinous, what existed on the physical level drew to itself the specific spiritual energies of which the physical form was a type.

For the Magical Consciousness, every ritual action done on the physical level, every form created, every word spoken or written, acted as the magnet to which its spiritual counterpart irresistably was pulled.

Thus, a consecrated image of Antinous is not an "idol" and his worshippers are not "idolators."

Anybody who has been around our own FLAMEN ANTONIUS SUBIA has seem him use his Inner Eye to do the same thing. He will look at a statue of a "Greek Ephebe" and will look inward for a moment and then will say, "It's Antinous!"

Some have criticized him for doing this, saying he can't possibly know the provenance of the statue and whether it was perhaps actually supposed to be Hermes or someone else. Antonyus uses his Inner Eye and "sees" the spiritual Blessed Boy in the stone ... or says it is not Antinous, as the case may be.

The Ancient Priests of Antinous did the same thing in carrying out religio-magical services for the faithful. Not only could a physical image (whether two-dimensional or three-dimensional) provide a "body" for an already existent spiritual entity, but images could also become the spiritual base for "thought forms" that were called into existence through their being represented in miniature on the physical plane.

The Ancient Priests of Antinous were deeply aware of the interdependence between the Divine World and the Human World. In the times in which they lived, these two spheres were not experienced as separate from each other in the way that they have come to be experienced today. 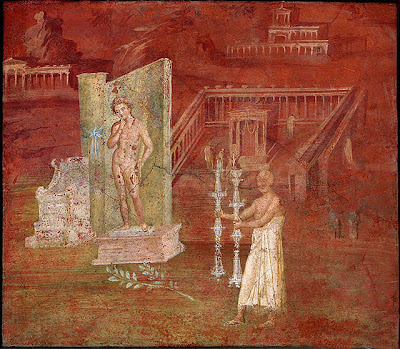 "As Above, So Below" was not just a catch-phrase for them, but instead it was a way of life.

It is our goal in this distant, soulless, post-modern age, to rediscover this ability to live in relationship to, and act as a conduit for, Antinous the Gay God.

But we can learn from the Ancient Priests of Antinous. The cosmos of which they were aware was primarily spiritual and only secondarily material. In their physical world, everything was spiritually alive ... even soft-toys, coins and bronze (or maybe brass) statuettes bought on eBay ... even a downloaded photo in a hip wallet.

The main task of the Ancient Priests of Antinous was to build a magical bridge between physical and spiritual reality, momentarily bringing them into conjunction.

So the answer to the question "Is that image really Antinous?" would be answered this way by an Ancient Priest of Antinous: "It is so if you MAKE it so. Open your eyes to the 'Antinous Within'. Apprehend HIS presence which is already inside the earthly reproduction. Through you, then, it IS Antinous!"

You don't need to build a temple of steel, stone and glass. You ARE the temple.