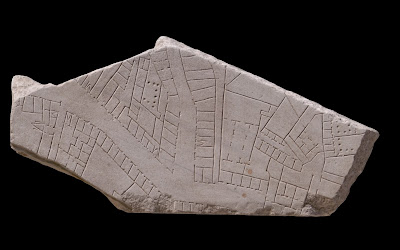 The wide street that traverses this fragment of a map of the city of Rome from right to left (west to east) has been identified as the Clivus Suburanus, a major street that ran from the Forum and the Argiletum through the Subura neighborhood, past the front of the Porticus Liviae, to the Esquiline Gate.
This fragment is from the Forma Urbis Romae, or Severan Marble Plan of Rome. This enormous map, measuring ca. 18.10 x 13 meters (ca. 60 x 43 feet), was carved between 203-211 AD and covered an entire wall inside the Templum Pacis in Rome.
It depicted the ground plan of every architectural feature in the ancient city, from large public monuments to small shops, rooms, and even staircases. 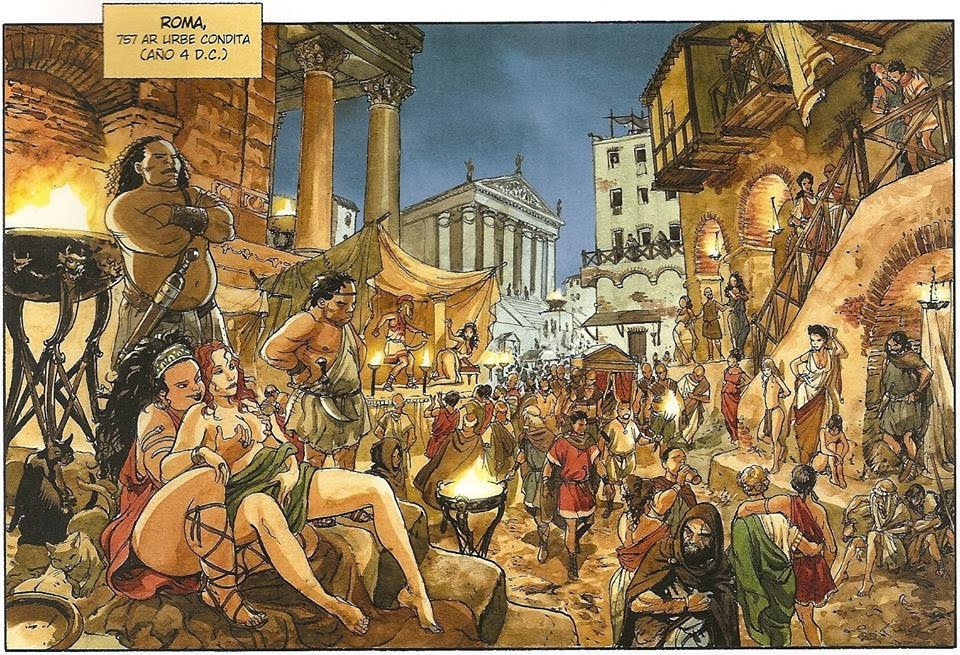 This fragment represents a large section on the Oppian Hill of the residential and commercial district called the Subura.
Roman poets like Martial and Juvenal described the Subura as a sordid commercial area, riddled with violence, brothels, and collapsing buildings.
In reality, it was probably not different from any other neighborhood in Rome … or many modern European cities, for that matter … where commercial activity intermingled with the religious and political life in the great public monuments and smaller local shrines and meeting halls of the local "collegia" and where the large "domus" homes of the rich stood next to the decrepit apartment buildings that housed the poor.
An abundance of evidence demonstrates that even in imperial times the Subura housed senators (probably on the upper slopes) as well as sandal makers, blacksmiths, and cloth sellers. Commercial activity was probably concentrated all along the clivus Suburanus. 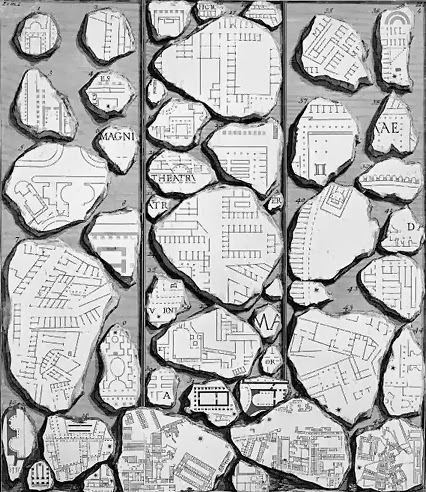 The Severan Marble Plan is a key resource for the study of ancient Rome, but only 10-15% of the map survives, broken into 1,186 pieces.
For centuries, scholars have tried to match the fragments and reconstruct this great puzzle, but progress is slow … the marble pieces are heavy, unwieldy, and not easily accessible.
Now, computer scientists and archaeologists at Stanford are employing digital technologies to try to reconstruct the map.
In collaboration with the Sovraintendenza of the Comune di Roma, a team from Stanford's Computer Graphics laboratory has been creating digital photographs and 3D models of all 1,186 fragments.

The next step is to develop 3D matching algorithms to "solve the map," and to build a fully searchable database of the fragments … a much-needed tool for archaeological research.
Posted by Hernestus at 12:00 AM