THE ANTINOUS MARLBOROUGH GEM
By Our Flamen Antonius Subia 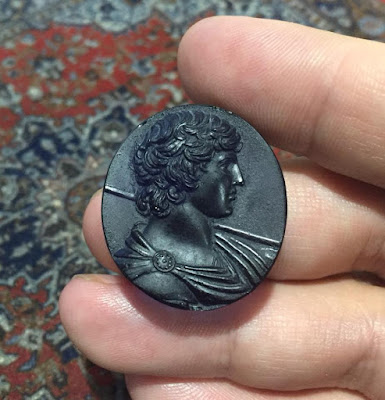 Just acquired at auction!!!
My own glass copy by James Tassie
Of the Antinous Marlborough Gem!!!
And the best thing about it is that it is
This transitional color between Blue and Purple
Laid flat it looks like Lapis Lazuli,
Held under bright light it looks like sapphire
But mostly it looks like deep grape purple
(See photos at bottom of entry)
Its so wonderful, crisp and heavy like a stone! 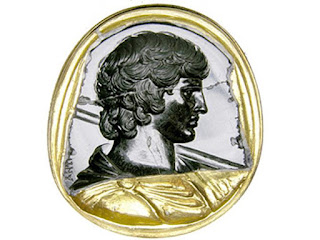 The Marlborough Sardonix is a black stone jewel intaglio with the image of Antinous that was signed by Antoninianus of Aphrodisia, who also sculpted the Lanuvium relief now kept in Rome, the only artist known to have signed his name on his work and we have two of his pieces.

It was proposed by Marguerite Yourcenar that what is known now as the Marlborough Sardonix after the British house of Marlborough who still owns the original, was once worn as a ring by Hadrian himself, which would make it one of the most sacred and precious items of our religion.

Even copies such as this glass cast if a Tassie copy are precious because they capture the spirit of the original...and in our religion...the true image of Antinous is the basis upon which everything is based.

We have brought this gem and many other treasures into the safe keeping of the Antinous Religion, we hope to gather many more precious images of our god together and pass them on as a valuable treasury of Sacred Antinous items to our successors.

May Antinous bless this image of the Marlborough sardonix and bless all those who venerate it as his true image. 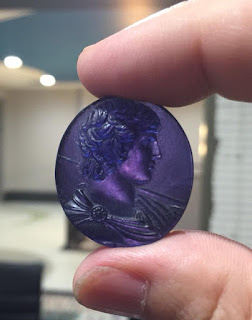 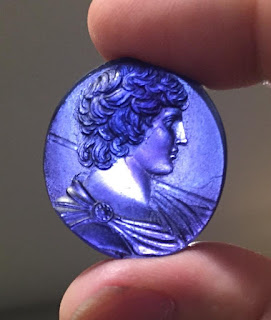