PART OF HADRIAN'S WALL
FOUND IN MIDDLE OF NEWCASTLE 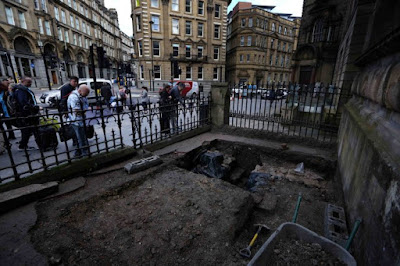 A part of Hadrian’s Wall has been found in the middle of modern Newcastle, shedding new light on its route across the north of England.

Ironically, the section of the historic wall was uncovered outside the Mining Institute on Westgate Road.

Diggers made the discovery as they excavated land during restoration works at the Victorian building. It was reportedly last seen during a similar excavation at the site in 1952.

But Simon Brooks, acting general manager of the Mining Institute, said: "There was some controversy about whether the Wall had been found. A lot of people were skeptical but now we have proof positive and we are delighted." 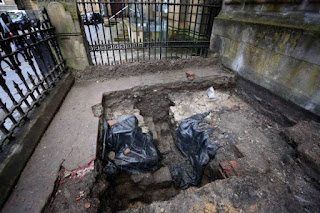 Site investigations are now being carried out by Newcastle-based The Archaeological Practice.

"Various people had cast doubts about what had been found in 1952 but this now adds a lot more precision about the course of the wall."

Nick Hodgson, author of the new book, "Hadrian's Wall on Tyneside," said: "It is wonderful to see the wall again in the centre of Newcastle."

The wall has also been previously located under the Coopers Mart building at the bottom of Westgate Road, now occupied by Ryder Architecture.

The remains of a milecastle ... a small Roman fort ... have also been found near Newcastle Arts Centre on Westgate Road.