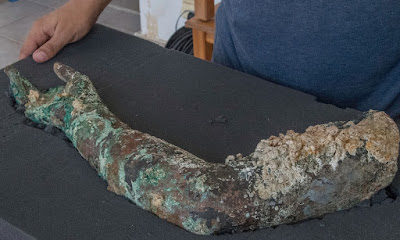 MARINE archaeologists report they have uncovered a bronze arm and the remains of at least seven more priceless statues from an ancient Roman shipwreck famed for yielding an amazingly sophisticated astronomical calculator the "Antikythera Mechanism" for casting horoscopes.

Divers found the right arm, encrusted and stained green, under sediment on the boulder-strewn slope where the ship and its cargo now rest.

The huge vessel, perhaps 50 meters from bow to stern, was sailing from Asia Minor to Rome when it foundered near the tiny island between Crete and the Peloponnese. 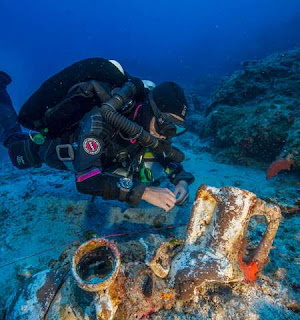 An international survey team says the ship is twice as long as originally thought and contains many more calcified objects amid the ship's lost cargo that hint at new discoveries.

The ancient Roman shipwreck was lost off the Greek coast around 67 BC, filled with statues and the famed astronomical clock.

"What we're finding is these sculptures are in among and under the boulders," said Brendan Foley, co-director of the excavations team at Lund University. "We think it means a minimum of seven, and potentially nine, bronze sculptures still waiting for us down there."

The boulders that overlie the metal objects weigh several tons and may have tumbled onto the wreck during a massive earthquake that shook Antikythera and surrounding islands in the 4th century AD. 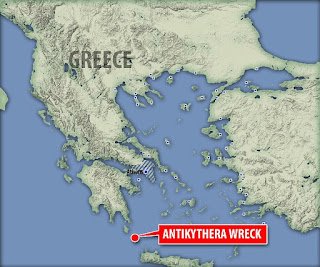 The bronze arm, probably from a statue of a male, is the highlight of the team's 2017 excavation season.

Last year, the team found the skull, teeth, ribs and other bones of an individual who perished on the wreck. They have since extracted DNA from the skull and from it learned the individual's sex and where they came from. 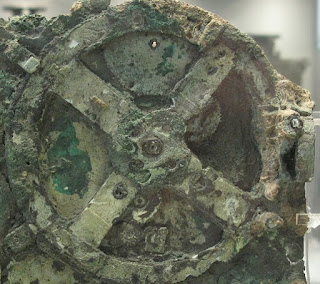 A lead anchor recovered in a stowed position in the new survey shows that the ship likely sank unexpectedly when "a storm blew it against an underwater cliff," says marine archaeologist Theotokis Theodoulou of Greece's Ephorate (Department) of Underwater Antiquities. "It seems to have settled facing backwards with its stern (rear) at the deepest point," he says.
Posted by Hernestus at 9:00 AM