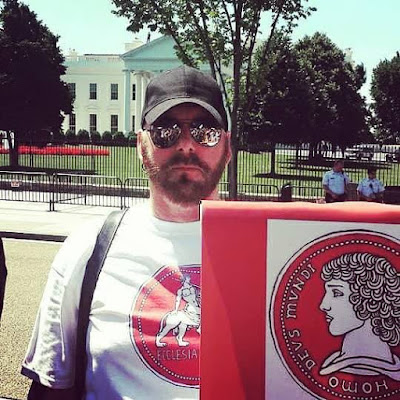 WE have a new priest of Antinous! MICHAEL ISOM of Roanoke Virginia was consecrated in joyous ceremonies at the Hollywood Temple of Antinous tonight.

Michael, whose priestly name is Michaelus Lucian Marius Aquila Isom, now brings our priesthood to six, spanning three continents, North America, Europe and South America. He is the first priest on the East Coast of the United States.

Michael not only is an active worshiper of Antinous, he has literally taken the Antinous brand ... and Antinous is immortalized in iconic skin art on his body!

The priests of Antinous unanimously approved the consecration of Michael, who has been a member of our community since 2004 and who has conducted workshops and rallies on behalf of Antinous.

Earlier this year, Michael marched in Washington DC and held our banner high in front of the White House.

His consecration by our Flamen Antonius Subia was conducted before a worldwide link-up via Skype during Foundation Day ceremonies at the Hollywood Temple of Antinous on 30th October.

GEORGE MICHAEL (25 June 1963 - 25 December 2016) now is with Antinous among  the glittering stars. He has found his Freedom and his Faith. It was his Last Christmas, and we shall miss him.

ZELIMKHAN BAKAEV (23 April 1992 - October 2017) - This Russian singer Zelimkhan Bakaev was arrested, tortured, and murdered by by Chechen authorities due to "suspicion of homosexuality."

MARY RENAULT 4 September 1905 – 13 December 1983) was a British lesbian writer best known for her wonderful historical novels that recreated in Ancient Greece in magnificent detail (The King Must Die and The Persian Boy). Renault met her life partner Julie Mullard in 1933 while they were training as nurses and they were together for 50 years, until Renault's death in 1983.

SAL MINEO - was an acclaimed Hollywood movie actor who was an inspiration to millions of LGBTI people. Born 10 January 1939, he was murdered in Hollywood 12 February 1976.

ITABERLLY LOZANO - this 17-year-old boy was murdered by his mother in Brazil ... because he was gay! His charred body was found in a trash heap in January 2017.

WILLEM ARONDEUS - (22 August 1894 – 1 July 1943) a Dutch gay non-Jewish artist and writer who led a group in bombing the Amsterdam Public Records Office in order to hinder the Nazi round-up of Jews, was executed with 12 others by firing squad. "Let it be known that homosexuals are not cowards," were his final words.

BARTOLOMEO CAVACEPPI - 18th Century sculptor and restorer if antiquities. He worked with both Cardinal Albani and Johann Joachim Winckelmann restoring and copying the Cardinal's vast collection so we can be sure that many of our Antinous images passed through his studio and were restored to their former glory.