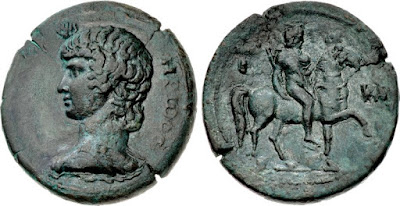 THIS stunning ancient Antinous drachma coin is up for auction ... and estimated to fetch $3,000 ... proving once again that "Antinomania" is very much alive amongst collectors.

It is literally in "mint condition" ... as pristine as the day it was minted more than 1,800 years ago.

In ancient times, Antinous coins and medallions were carried as amulets and talismans by his worshipers. Most people could not read, but they could understand the symbolism on his coins.

This is a coin showing Antinous as Hermes/Mercury on both side. CLICK HERE for details on the auction.

On one side Antinous is seen in profile wearing the Egyptian HEM-HEM crown of rulership. On the other side, Antinous as Hermes/Mercury rides a horse and holds a caduceus.

It was minted in Alexandria Egypt in about 136 AD ... six years after the death of Antinous in Egypt.

In his authoritative book about Antinous, BELOVED AND GOD, Royston Lambert points out that in ancient times many followers of the Blessed Youth felt it was necessary to have a tangible representation of Antinous with them at all times for protection and for blessings.

Some of the devotees evidently could not bear to be parted from the beneficial and reassuring presence of their Antinous.
People of modest means who were lucky enough to get their hands on one of his commemorative coins would carry it with them for protection, often even wearing them.
Many were pierced by holes and hung from the neck as talismans: Antinous' image offering protection against evil, sickness and death.
Other such medallions were mounted in frames to adorn household altars, and others were buried with the dead to invoke the god's aid on the perilous journey into the unknown.