UNIQUE IMAGES OF EGYPTIAN BOATS
FOUND IN TOMB NEAR ANTINOOPOLIS

MORE than 120 images of ancient Egyptian boats have been discovered adorning the inside of a building in Abydos ... not far upstream on the Nile from ANTINOOPOLIS.

The building dates back more than 3,800 years and was built near the tomb of pharaoh Senwosret III, archaeologists reported.

The tableau, as the series of images is called, would have looked upon a real wooden boat said Josef Wegner, a curator at the Penn Museum at the University of Pennsylvania, who led the excavation. 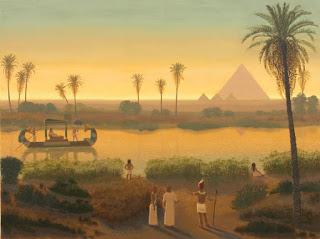 Only a few planks remain of the wooden boat, which would have been constructed at Abydos or dragged across the desert, Wegner said.

In ancient Egypt, boats were sometimes buried near a pharaoh's tomb.

The largest images are nearly 5 feet (1.5 meters) in length and show "large, well-rendered boats depicted with masts, sails, rigging, deckhouses/cabins, rudders, oars and in some cases rowers," wrote Wegner in an article published in the International Journal of Nautical Archaeology.

Some images are small and simple, the smallest reaching only about 4 inches (10 centimeters) in length, wrote Wegner. 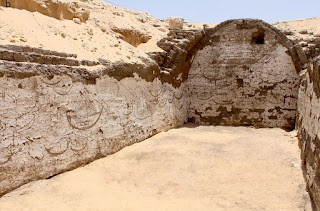 Though 120 boat images survive today, there would have been more incised on the building walls in ancient times, Wegner wrote.

In addition to the boats, the tableau contains incised images of gazelle, cattle and flowers, he noted.

ABYDOS was once the most sacred city in Egypt where, for thousands of years, Egyptians made pilgrimages to pay their respects to Osiris. 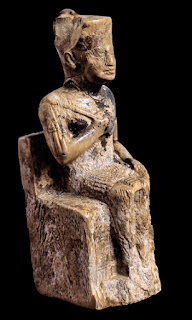 Pharaohs had symbolic tombs at Abydos and left many treasures there.

The only SCULPTURE OF KHUFU, builder of the Great Pyramid, was found at Abydos ... flushed down a latrine in ancient times (left).

Nowadays most tourists bypass Abydos, which would be unfathomable to the Ancient Egyptians, who considered it the most Sacred City.

In a way, Abydos was the Ancient Egyptian Mecca or Lourdes ... a place where pilgrims converged for prayers and meditation.

Pilgrims also attended the annual Passion Plays which explained the cruel death and mutilation of Osiris and the grief of Isis and the miraculous resurrection of Osiris as Egyptian god of Victory over Death and King of Eternity.

Abydos is the site of the Tomb of Osiris is a subterranean chamber fed by an underground channel from the nearby Nile, which created a moat inside the chamber. The chamber was accessed by priests via a long, dark passageway.