EXQUISITE MUMMY CASE FOUND IN EGYPT
BUT WHERE IS TOMB OF ANTINOUS? 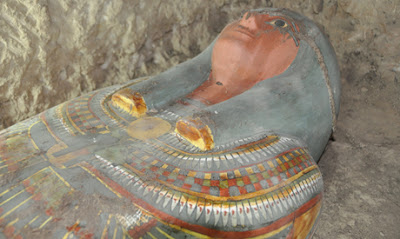 AN exquisite mummy case has been discovered in Western Thebes ... proving once again that beautiful treasures lie under the sands of Egypt ... and raising once again the hope of finding the Lost Tomb of Antinous.

Spanish archaeologists working at the Temple of Millions of Years of Thutmose III, at Al-Deir Al-Bahari on Luxor's west bank, stumbled upon the tomb of the servant of the king's house, Amenrenef. 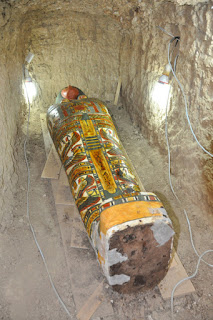 A rotten wooden coffin was found inside the tomb, but experts said their breath was taken away when the looked inside and found a beautiful and well-preserved mummy cartonnage.

Cartonnage is a kind of papier maché mummy case with brightly colored painting. It is created by glueing sheets of linen together and pressing them into a shape which hardens into a protective shell.

Mission field director Egyptologist Myriam Seco Álvarez said that preliminary study has determined the name and title of the occupant of the tomb.

He was Amenrenef, the servant of the king's house. Thutmose III was the stepson and co-regent of Hatshepsut. 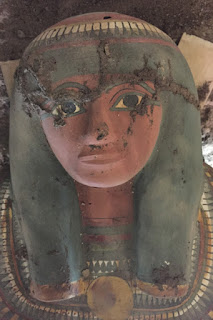 Álvarez said that in-depth study of the cartonnage is to be undertaken very soon.

Álvarez said out that the cartonnage includes its almost complete polychrome painted decoration and inscriptions with some of the most characteristic symbols and elements of the ancient Egyptian religion.

In vivd colors are solar symbols, the protective goddesses Isis and Nephthys with spread wings, hawks and the four sons of Horus, executed in artisanal quality of the highest order.

If discoveries can still be found even in Egypt, where archaeological digs have been going on for centuries, then the resting places of such personalities as Alexander the Great and Antinous may also be hidden under the sands.

Antinous died in the Nile in Egypt, but his resting place has never been identified.