AS AS the Iraqi military struggle to reclaim the city of Mosul in northern Iraq from the DAESH (Islamic State ISIS) barbarians, satellite images show that two iconic archaeological sites have been purposefully destroyed ... and not necessarily by fighting.

Both were capital cities of ancient Mesopotamia ... the important region where writing, farming, and civilisation as we know it arose. An ancient temple described as "the most spectacular sacred structure known from ancient Mesopotamia" has been bulldozed to the ground.

The two sites haven't been formally inspected by archaeologists yet, due to ongoing fighting in the area, and no one has officially owned up to the damage.

But based on the satellite images, researchers from the American Schools of Oriental Research (ASOR) Cultural Heritage Initiatives say they were most likely deliberately destroyed by ISIS. 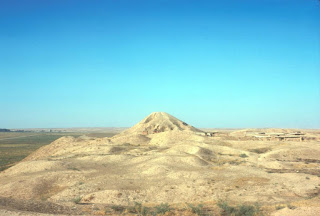 The worst affected site was the ziggurat of Nimrud ... a towering, terraced temple that was built nearly 2,900 years ago.

You can see it before it was flattened at left.

Last year, DAESH destroyed a different temple and palace at Nimrud, but it seems they weren't happy to leave the ziggurat standing.

As the satellite image shows, the ziggurat was flattened, and there are hints that it was done by land-clearing equipment.

The Nimrud ziggurat wasn't in quite such good shape even before the recent attack, but after 2,900 years, it still stood 43 metres (140 feet) high.

When archaeologist Austen Henry Layard excavated the site in the 1800s, he described it as "the most spectacular sacred structure known from ancient Mesopotamia".

There are reports that Nimrud has since been liberated, but archaeologists haven't had a chance to inspect the site to see what's left. 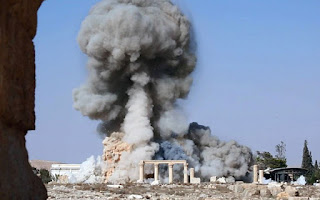 It's likely that ISIS will have also planted the now-flattened area with IEDs and mines, which is what they did before they fled the ancient city of PALMYRA in Syria.

But there is also good news coming out of Iraq: Archaeologists have discovered the remains of a Bronze Age city in northern Iraq, less than 30 miles from Islamic State territory.

A research team from the Institute for Ancient Near Eastern Studies (IANES) at the University of Tübingen in Germany uncovered the settlement in the small town of Bassetki in Iraqi Kurdistan.

Researchers found concrete evidence of the settlement, including a large stone wall and a temple likely dedicated to the Mesopotamian weather god Adad. The city dates back to 3000 BC. and thrived for about 1,200 years.

Archaeologists also discovered nearby other, later settlement layers at the site dating back to the Akkadian Empire, perhaps the first world empire, from the late 3rd century BC.

The discovery underscores how much history is still buried beneath a country wracked by war.

"The area around Bassetki is proving to be an unexpectedly rich cultural region, which was located at the crossroads of communication ways between the Mesopotamian, Syrian, and Anatolian cultures during the Bronze Age," said Professor Peter Pfälzner from the University of Tübingen, one of the lead archaeologists at the site. Some 300 archaeological sites have been discovered in the region since 2013.

Pfälzner and Hasan Qasim, an antiquities expert, led the excavation. They operated out of Dohuk, only 50 miles from the embattled Islamic State stronghold of Mosul, where Iraqi security forces are currently engaged in a street-to-street battle to take back the city.

Islamic State militants are leaving a trail of MURDERED GAY MEN and other horrors in their wake as they lose ground.

But digging on the outskirts of a war zone didn't dissuade the research team.

"The protection of our employees is always our top priority. Despite the geographical proximity to [the Islamic State], there's a great deal of security and stability in the Kurdish autonomous areas in Iraq," Pfälzner said.

The Islamic State has targeted archeological experts and sites in the past. In August, 2015, the group beheaded renowned antiquities scholar Khaled al-Asaad in the Syrian city of Palmyra, a UNESCO World Heritage site laden with ancient ruins.

Asaad refused to lead militants to hidden ancient artifacts. The Islamic State destroys antiquities or loots them to bankroll its war machine.

But with the Islamic State on the defensive in strongholds like Mosul and Raqqa, the threat to archaeologists, and the fragile sites they are excavating, may be abating.

"We’re planning to establish a long-term archaeological research project in the region in conjunction with our Kurdish colleagues," said Pfälzner.