MOVE over, Stonehenge, we have found “Superhenge”. An even more massive stone monument has lain hidden for thousands of years just a short walk away from the famous prehistoric site.

The newly discovered remains are at a site called Durrington Walls, already well known to archaeologists. 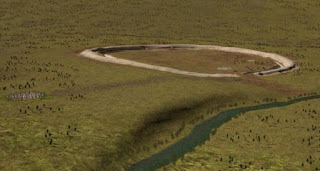 Here, a bank and inner ditch were built around a natural depression, creating a horseshoe-shaped structure about half a kilometre wide.

It resembles an arena, and some think that is exactly what it was.

Now the mystery has deepened: remote sensing surveys have revealed that around 4500 years ago giant stones were arranged along the ground where the bank now is.

Around 30 stones up to 4.5 metres long are buried there, and the surveys suggest there were at least 90 originally.

It appears the stones were deliberately toppled and buried when the bank was built around Durrington Walls, for reasons that are unclear. There are no plans as yet to excavate the stones.