ENCOUNTER WITH A PRIEST OF CANOPUS
By Priest Hernestus 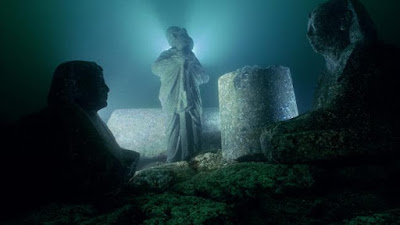 I want to share one special experience about the OSIRIS, MYSTÈRES ENGLOUTIS D'EGYPTE (Osiris Sunken Mysteries of Egypt) at the ARAB WORLD INSTITUTE in Paris.

The exhibit features treasures brought up from the ocean floor by French archeologist Franck Goddio, the expert who made headlines several years ago with his discovery of palace and temple ruins in the waters off Alexandria.

This time he focused on the fabled "Lost Cities" of Canopus and HERAKLEION (Heracleion), two cities just east of Alexandria which were visited by Hadrian and Antinous, as you know. 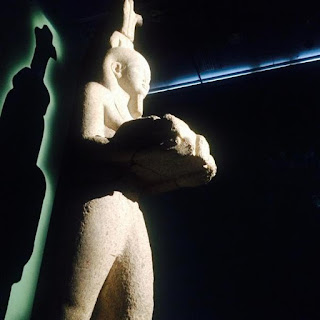 There are some lovely objects, including a monumental statue of the transgender Nile inundation deity Hapi which towers nearly 20 feet tall.

It was very moving to think that Hadrian and Antinous had seen this statue, along with equally monumental statues of Isis and Amun, standing in front of the main temple at Herakleion.

But the one object that impressed me most and which touched my heart was a life-size statue of a robed priest holding a precious image of his god in the form of an Osiris-headed Canopic vessel.

The museum didn't encourage photographs and besides the lighting in the exhibition space was kept very inky dark, supposedly to protect the objects which had lain in darkness for more than 1,500 years. 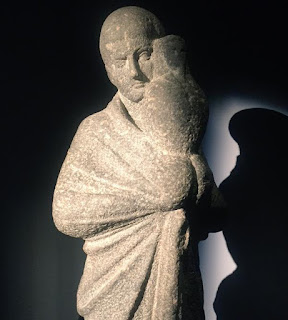 But here are photos of the priest's statue nonetheless.

Oh, he was so lovely to behold. I stood there just two feet in front of him as he held his treasure.

He is carved from black granite which glistened in the subdued lighting (not matte as the surface appears under water) and the folds of his garment are so carefully wrought.

His feet are broken off, but otherwise he is whole. His face is superbly done and everything is all there. Even the nose is intact.

He holds his god aloft yet averts his gaze respectfully. There's the trace of a sweet smile on his lips and his facial expression is a mixture of bliss and reverence and awe.

Notice how he does not dare hold the vessel in his bare hands, instead keeping them shrouded in the folds of his robes. 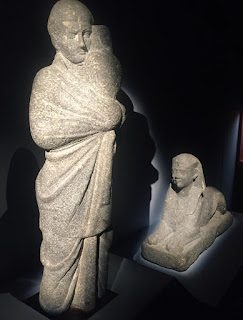 But also notice how he rests the vessel lovingly against his left cheek and temple.

He touched my heart with his love for his god.

I touched the fingers of my left hand to my lips and kissed them and placed them gently on his right arm ... when the security guard wasn't looking.

And then touched them to my lips again and said a prayer for him and for joy at his new chance at eternity.

This statue is believed to date from the end of the 1st Century ... so it is possible that Hadrian and Antinous saw this statue. It is also remotely possible that the priest in question might still have been alive when they visited.

The sweetness of this long-dead yet undying priest touched my heart at this special juncture in my life.

It was wonderful to seem him standing there, having taken hold of his god and never to let loose.