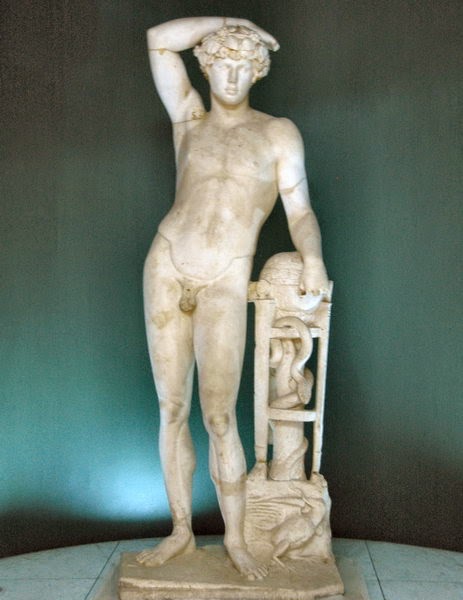 A very beautiful, very mysterious statue now faces a very serious threat as armed rebel forces advance on Tripoli in a bid to overthrow the government of Libya.

Antinous Deus Frugiferus (Antinous the Fruitful God) was found in the Frigidarium of the Hadrianic Baths in Leptis Magna, Libya.

It now faces an uncertain future in the museum at Islamic-ruled Tripoli along with countless other Roman-era art treasures.

The head is clearly Antinous, but the pose with arm thrown casually over head hints at Apollo Lykeios catching his breath after an intense workout.

The serpent hints at Aesculapius the sacred physician ... And an inscription at Leptis Magna refers to "Antinous the Fruitful God" (deus frugiferus), a reference to Dionysus. As always, Antinous embraces all of the above!

Two rival governments and their respective armed forces are battling for control of Libya after the civil war that ousted Moamar Gaddafi.

The chaos has also allowed radical Islamist militants to bolster their foothold in the oil-producing OPEC member.