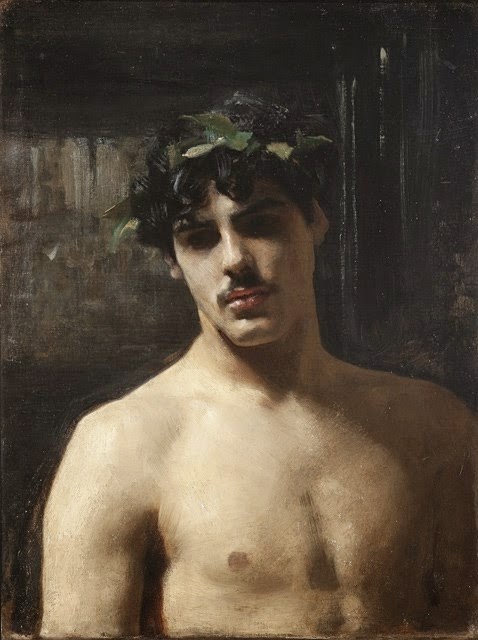 A crumbling papyrus found near Antinoopolis offers a sure-fire hangover cure ... and one that is also a fashion statement.

A leafy wreath of curative herbs was just the thing to clear your day-after head, according to a newly translated and published papyrus written in Greek with the prescription for "A DRUNKEN HEADACHE" cure.

The alcohol victim would have strung together leaves from a shrub called Alexandrian chamaedaphne (Ruscus racemosus L.), possibly wearing the strand around the neck or forehead, not unlike this Classical youth wearing a victory wreath by John Singer Sargent.

The 1,900-year-old papyrus dating back to the time of Antinous containing the hangover treatment is one of over 500,000 such documents found in the ancient Egyptian town of Oxyrhynchus not far from Antinoopolis by researchers Bernard Grenfell and Arthur Hunt about a century ago.

But the study and publication of so many papyri is a long and slow task that has been going on for a century.

Only recently, volume 80 was published, containing studies and decipherments of about 30 medical papyri found at Oxyrhynchus, including the papyrus with the hangover treatment.

This newly published volume represents "the largest single collection of medical papyri to be published," wrote Vivian Nutton, a professor at University College London, at the beginning of the volume.

The collection includes medical treatises and treatments for a wide variety of ailments, including hemorrhoids, ulcers, tooth problems and even some fragments discussing eye surgery.

The writers of these ancient papyri relied heavily on Greek knowledge. The ancient residents of Oxyrhynchus strongly embraced Hellenistic (Greek-influenced) culture, something that spread throughout Egypt, and the wider Middle East, after the conquests of Alexander the Great, Nutton said.