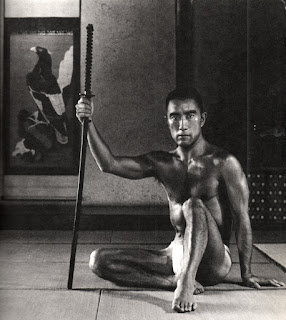 ON January 14 we mark the anniversary of the birth of one of modern Japan's most famous, controversial, and mysterious gay personalities ... and a saint of Antinous.

Yukio Mishima (1925-1970) is regarded as one of 20th-century Japan's most prolific writers, and was the first postwar Japanese writer to achieve international fame.

Nominated on three occasions for the Nobel Prize for Literature, and author of no less than forty novels, essays, poems, and traditional Japanese kabuki and noh dramas, Mishima’s contribution to Japanese literature was indeed profound.

His samurai-inspired ritual "seppuku"suicide by "hara-kiri" (literally stomach cutting, or disembowelment) and beheading on November 25, 1970, at the young age of 45 marked the end of a life that represented for some, a protest against a post-war Japan that seemed to have lost its traditional identity and values under the tide of mass consumerism, and cultural and political Westernization. 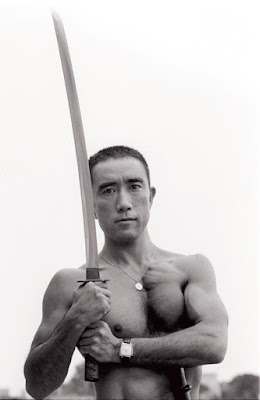 The sharp contrasts between the country he grew up in and the Japan he died in were defining influences in his life, shaping his writings, which often questioned the new Japan and harked for a return to days of old.

Born Kimitaka Hiraoka in Tokyo on Jan 14, 1925, he assumed the nom de plume "Yukio Mishima," cryptically interpreted as "He who chronicles reason," so that his disapproving anti-literary father would not know he was a writer.

It was however his paternal grandmother, Natsuko Hiraoka, who was to have the most lasting impact on his life. A mere 29 days after his birth until his 12th year, Mishima was separated from his family and raised by his sophisticated yet capricious grandmother whose own background and personality shaped his character.

The young protégé was forced to live a very sheltered life in which sports, playing with other boys, and even going out in the sun were off limits. She was the illegitimate daughter of a Meiji era daimyo with familial links to the all powerful Tokugawas and was reared in a princely household, a samurai-influenced upbringing which she did not let others forget and which instilled in her, and by consequence her grandson, a reverence for Japan's past, and the samurai fascination with beauty, purity and death.

Her noble past and yet not so noble marriage to a successful bureaucrat arguably contributed to her frustrations, characterized by violent outbursts and morbid fixations.

Her character had a lasting yet undeclared effect on Mishima’s later works and personality, particularly the insatiable desire for perfection in the mind and body, and the terrible beauty of death at the moment of perfection exemplified by the honored cherry blossom. 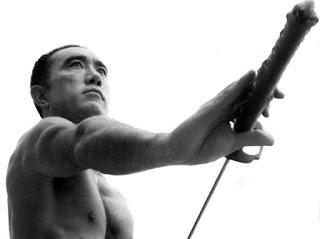 Mishima's complexities were not only confined to his writings. A fluent speaker of English, Mishima wore Western clothes and lived in a Western style house while espousing a return to his country’s past values and practices.

Much mystery also surrounds the exact nature of his sexuality, and his frequenting of gay bars such as the now defunct Brunswick bar in Ginza despite a rushed marriage at 33 which produced two children.

Mishima's interest in homosexuality is clearly illustrated in one of his seminal books, "Confessions of a Mask" (1948) where he tells of a man who conceals his true self and sexuality behind a mask of lies and pretense. This book is regarded by many as a semi-autobiographical account of the author's own life.

According to his biographers, he had also considered a marriage proposal to Michiko Shoda, the current empress and wife of Emperor Akihito.  Biographers such as close friend John Nathan contend that the tragic writer married not for love but for respectability.

At the earlier age of 30, conscious of the inevitability of aging, and desiring bodily "perfection," he embarked on a strict bodybuilding regime that lasted for the rest of his life.

His longing for a return to a spiritual Japan which respected the bushido (way of the warrior) code inspired his expertise in karate and kendo, martial arts that he contended allowed one to experience the border between life and death.

His extreme nationalist credentials were most notably illustrated in his founding of the Tatenokai (Shield Society) in 1968, a small private army of mostly university students dedicated to the bushido code and the protection of the emperor and the martial discipline of pre-Meiji era Japan.

This dedication was not to Hirohito per se, whom he had criticized for "dishonoring" the war dead by surrendering, and for renouncing his divinity after World War II, but rather to the symbolism of the emperor system for traditional Japan.

On November 25, 1970, carrying with him a longing for a return to lost samurai values, and an obsession with a purifying and beautiful death, Mishima and four of his Tatenokai followers, entered the Japanese Self-Defense Forces (JSDF) headquarters in Ichigaya and attempted a coup d’etat which they hoped would awaken the Japanese from their spiritual and political slumber. 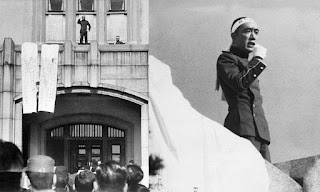 Stepping out onto a nearby balcony, Mishima was ridiculed and jeered as he attempted in vain to rouse the present JSDF members below him to his cause. Realizing the hopelessness of his efforts, the "Lost Samurai" went back inside for his final act of drama.

Positioning himself in traditional Japanese manner on the floor of the office which they had seized, Mishima proceeded to ritually disembowel himself with a “tanto” (a small sword), exclaiming “Long live the emperor” just before a pre-ordained “kaishakunin” (the one chosen to decapitate Mishima) and later one other, made an initially botched but ultimately effective attempt at beheading the famed author.

Debate surrounds Mishima’s motivations. Attempting a coup d’etat with only four other people was almost certainly going to be a failure. Comments made to Western journalists about hara-kiri in his writings some years earlier might be more insightful.

At that time, the author claimed that "spiritually, I wanted to revive some samurai spirit. I did not want to revive hara-kiri itself but through the vision of such a very strong vision of hara-kiri, I wanted to inspire and stimulate younger people."